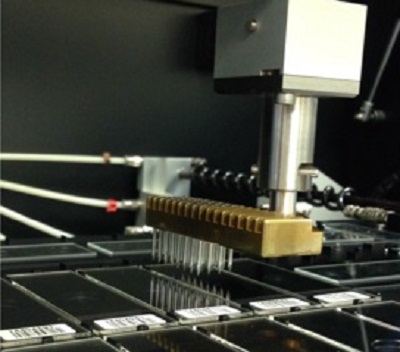 The Schneekloth lab uses a robotic microarrayer to manufacture SMMs.

Over the last decade, advances in genetics have revealed a wealth of information about changes in cells that lead to disease. The discovery of new targets, such as non-coding RNA, cryptic splicing sites, or elements in viral genomes, have moved the dial forward in the development of personalized treatment for patients with cancer and other diseases. Important to the design of these remarkable targeted therapies are small molecule microarrays, or SMMs.

Center for Cancer Research (CCR) scientists are using SMMs, a high throughput screening technology platform, that enables the discovery of RNA-, DNA-, and protein-binding small molecules, a privileged class of therapeutics that have been tremendously impactful in the clinic.

“In short, SMM screening is an extremely rapid, direct binding assay that is used to identify small molecules that interact with targets of interest. This approach allows us to identify molecules that bind to difficult targets, such as noncoding RNA, that may be involved in cancer and other diseases,” said John (Jay) Schneekloth, Jr., Ph.D., Investigator in CCR’s Chemical Biology Laboratory.

To manufacture SMMs, the Schneekloth lab uses a robotic microarrayer to spatially array and covalently link a chemically diverse library of ‘druglike’ small molecules to a glass surface. Arrays can then be incubated with a fluorescently labeled biomolecule, and fluorescence imaging can easily identify interactions between the target and small molecules on the array.

“One of the things that makes this approach so powerful is its tremendous speed: we are able to complete an SMM screen of about 26,000 compounds in roughly one day,” said Dr. Schneekloth. “This is substantially faster than other competing technologies such as traditional solution phase screening, and it requires much less biomolecule to complete the screen. This is particularly important when looking at RNA, an expensive and sometimes chemically unstable biopolymer.”

The SMM approach was originally invented in the early 2000’s by Stuart Schreiber’s laboratory at Harvard University to identify drugs for challenging protein targets. The Schneekloth lab focuses on using SMMs to discover, profile, and study RNA- and DNA-binding small molecules—concentrating on important, but highly challenging targets.

Working with colleagues such as Beverly Mock, Ph.D., Deputy Chief in CCR’s Laboratory of Cancer Biology and Genetics, the investigators studied the MYC G-quadruplex, a folded DNA structure within the promoter of the MYC gene, a regulatory gene. The transcription factor coded by this gene plays a role in cellular transformation; MYC is expressed at high levels in many types of cancer and is a major target for drug discovery. They were able to identify a small molecule that binds to this structure and silences the MYC gene with unprecedented selectivity. This small molecule was active in a variety of MYC-addicted cell lines and shows promise for the treatment of multiple myeloma. The study was recently published in ACS Chemical Biology as an ACS Editors’ Choice article.

In other work, by collaborating with Stuart Le Grice, Ph.D., Senior Investigator in CCR’s Basic Research Laboratory, and Barry O’Keefe, Ph.D., Deputy Chief of CCR’s Molecular Targets Laboratory the team analyzed a well-studied but puzzling drug target within the HIV genome. They used SMM screening to identify a druglike compound that binds to the HIV transactivation response (TAR) RNA hairpin. They showed that this compound binds to TAR with high selectivity in a complex RNA. The study was published in the Journal of the American Chemical Society.

The success of these two projects has led to a variety of other efforts. An important function of the Schneekloth lab is sharing their SMM screening expertise with other CCR researchers and with colleagues across the National Institutes of Health (NIH). Dr. Schneekloth is currently studying several new targets that have no previously identified small molecule inhibitors, such as riboswitches, RNA splicing sites, and viral RNAs. His overall goal is to identify small molecules that interact with nucleic acids within the cell.

As the Schneekloth lab learns more about RNA structure and function, they hope technologies such as the SMM platform will enable the discovery of compounds that inform RNA biology in the way that enzyme inhibitors can help provide information about protein signal transduction. It is their wish that continued collaborative efforts, both intramurally and extramurally, will lead to advances and new approaches in targeting disease-relevant RNA with small molecules.