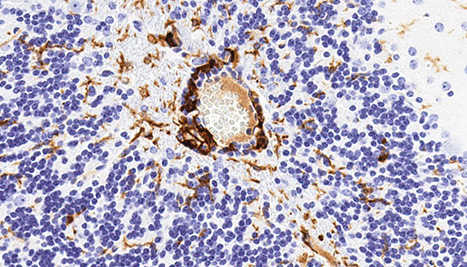 Inflammatory cells (brown) surround a blood vessel in the brain of a mouse with a stroke.
Photo Credit: Christine Hollander

In 30 percent to 40 percent of stroke cases, doctors can’t identify the biological cause. Certain risk factors for stroke, such as smoking and diabetes, cause inflammation. Scientists have long suspected that chronic inflammation can in turn trigger a stroke, but they have not made a direct link. Now, Li Yang, Ph.D., Senior Investigator in the Laboratory of Cancer Biology and Genetics at CCR, and her colleagues have reported that experiments with mice suggest inflammation alone can lead to stroke.

The finding emerged unexpectedly from a study in which mice were genetically engineered to have a gene mutation that reduces tumor metastasis. The engineered mice lacked a gene called transforming growth factor-β receptor II (Tgfbr2) in immune cells called myeloid cells. In those cells, Tgfbr2 normally promotes metastasis and is involved in inflammation signaling. Christine Hollander, Ph.D., Senior Research Assistant in Yang’s lab, noticed that all of the engineered mice developed strokes.

The team found that the mutation increased inflammation of blood vessels in the animals’ brains. The mouse blood also contained high levels of proteins called cytokines that are known to be involved in inflammation; elevated levels of these cytokines were seen both before and after a stroke. The cytokine profile in the mice was similar to that found in people who have had a stroke.

One of the researchers’ experiments showed that feeding the mice a high-fat diet hastened strokes. Conversely, treating the mice with anti-inflammatory drugs such as metformin, a diabetes therapy, and methotrexate, a rheumatoid arthritis treatment, helped prevent stroke.

The results, published online October 19, 2017, in Circulation Research, suggest that these mice could serve as research models for people who have had a stroke or might be likely to have a stroke. Current mouse models allow researchers to study only stroke treatments, but the mice with Tgfbr2 gene deletions could enable studies of stroke prevention. Checking patients’ blood for a cytokine profile similar to that observed in this study of mice could indicate if a person is at high risk for a stroke and should take precautionary measures.