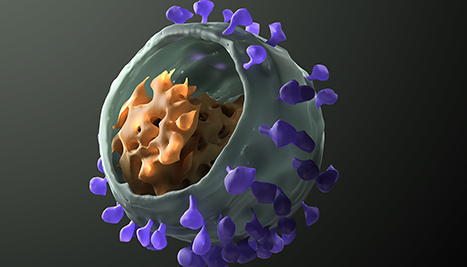 An infection-fighting white blood cell known as a CD14+ monocyte could be a key element in developing an effective human immunodeficiency virus (HIV) vaccine, according to a new finding published May 21, 2018, in Nature Medicine. The primate study was conducted at the Center for Cancer Research, NCI, and led by Genoveffa Franchini, M.D., Senior Investigator in the Vaccine Branch.

To better understand which vaccines might be most effective and how they would work, Dr. Franchini and colleagues tested several potential HIV vaccines to see if they would reduce infection by the evolutionary cousin of HIV infection in primates, known as simian immunodeficiency virus (SIV).

Because the immune system responds to outside stimuli in two ways, via either adaptive or innate response, the researchers needed to understand the balance between those two responses when HIV invades the body. AIDS, or acquired immune deficiency syndrome, develops when HIV invades T cells, components of the long-lasting and specific adaptive immune system. However, it appears that HIV invasion does not affect elements of the fast and broad-acting innate system the same way. This dichotomy has made HIV vaccine development difficult.

In their experiment, the researchers tested different vaccine regimens against infection with SIV. The team measured the number of immune system cells released after viral infection and the amount of antibody produced by the cells that recognize SIV. However, the vaccine regimen that produced the strongest immune response did not prevent infection. Instead, other approaches offered protection by balancing the activity of innate immune-response cells. Those  who were primed with a vaccine called ALVAC-SIV had more CD14+ monocytes and fewer CD16+ monocytes, types of infection-fighting white blood cells, whereas the opposite was true in the primates that were more prone to infection.

By then measuring gene activity in immune cells from primates who most strongly resisted infection, the researchers confirmed that innate system monocyte levels correlated with HIV resistance. These effects were driven by specific regulatory proteins called STAT3 and HIF1-alpha, depending on the type of monocyte. Activation of these proteins induced monocytes to release another protein, IL-1beta, that helps deploy additional cells to fight infection shortly after immunization and before HIV infection.

“We still don’t know which immune response leads to the destruction of cells infected by SIV,” said Dr. Franchini. “But we now have a better understanding of how to selectively engage certain monocytes after vaccination to sustain long-term immunity.”

The scientists noted that if these results could be translated into humans, research could be undertaken to improve patient care based upon an individual’s unique monocyte balance as well as to develop an effective vaccine treatment against HIV/AIDS.