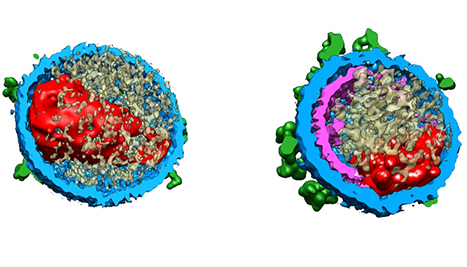 HIV-1 treated with a maturation inhibitor (right) compared to an untreated sample (left). Note that the cone-shaped core present in the untreated virus (red) is absent in the treated virus.  Formation of this core is essential for the virus to be infectious.
Photo courtesy of Eric Freed

Researchers from CCR have been successful in perfecting a new class of molecules, called maturation inhibitors, to treat patients infected with HIV-1. Maturation inhibitors work by blocking an important step in the processing of Gag, the core structural protein responsible for assembling HIV. The results were published in the Journal of Virology on December 19, 2018.

Clinical development of the first-generation compound, bevirimat, was stopped because about half the patients in the trial were resistant to the treatment. Eric Freed, Ph.D., Director of the HIV Dynamics and Replication Program, said that the process of determining why bevirimat failed led to their new discovery.

“Through analysis of viral sequences from the patients and follow-up lab work, we were able to pinpoint the viral variants that were not effectively blocked by bevirimat,” said Freed. “What’s more, the mutations responsible for the lack of inhibition were located near the cleavage of the capsid-space peptide 1, precisely the area targeted by the compound.”

To address this issue, Freed and his team, with their collaborators at DFH Pharma and the CCR Chemical Biology Laboratory, created derivative compounds based on the knowledge gleaned from mutations found during the first clinical trial of bevirimat. Multiple experiments showed that the second-generation compounds overcame the resistance problem and were markedly more potent and active than bevirimat.

A unique aspect of this study is that in addition to investigating the behavior of subtype B of HIV-1, most frequently examined because it is most prevalent in the United States and Europe, this research also looked at other subtypes circulating in the parts of the world most affected by the HIV-1 pandemic. The new maturation inhibitors proved to be highly effective against these other HIV subtypes.

The new inhibitors show promise in helping patients who have become resistant to currently available therapies or those who have problems tolerating those therapies. Freed points out that a significant number of patients fall into these categories.

Because of these encouraging results, different companies have begun laying the groundwork for clinical trials of the new derivatives. A phase I trial will monitor healthy volunteers for adverse effects. In an anticipated phase II trial, the compound will be used with infected individuals to test for efficacy.