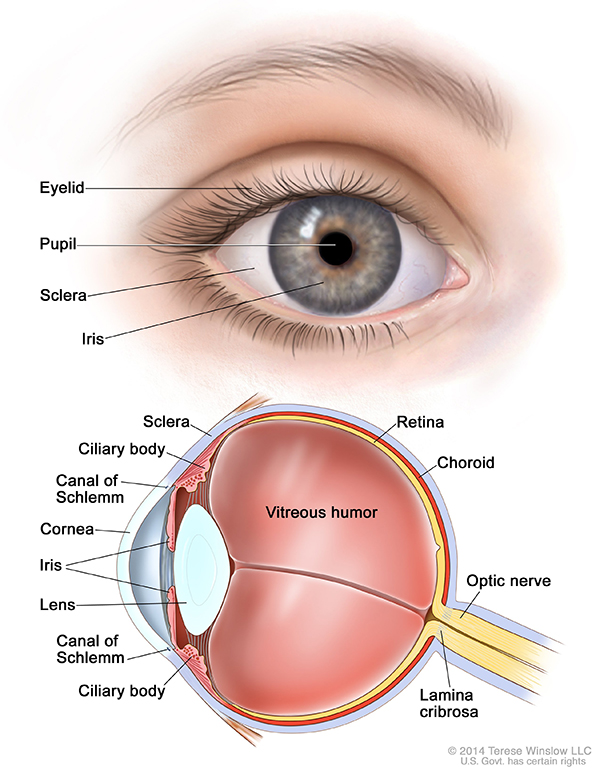 A new, non-invasive treatment for a rare eye cancer called uveal melanoma is showing promise in preclinical studies and clinical trials. The cancer attacks the iris and the parts of the eye that focus vision and provide blood flow to the eye.
Photo courtesy of NCI Visuals Online

A study by scientists in the Center for Cancer Research and Aura Biosciences, Cambridge, Mass., published December 14, 2017, in Molecular Cancer Therapeutics, provides new hope for the early treatment of a rare eye cancer called uveal melanoma.

Uveal melanoma is a disease that affects about 1,600 people in the United States. Some uveal melanomas first appear as dark spots in the eye’s iris and are therefore easy to find. But around 90 percent of tumors begin growing in hidden parts of the eye, including the ciliary body, which focuses our vision, and the choroid, which provides blood-flow.

Because most uveal melanomas are tough to detect in early stages of the disease, they often are not treated until they have begun to metastasize, usually to the liver. Once uveal melanoma becomes metastatic, there is no cure. Current late-stage treatments, including potentially vision-damaging radiation and complete removal of the affected eye, only slow the disease but do not eliminate it.

Scientists are focusing on finding ways to diagnose and treat uveal melanoma in its earliest stages. In a multi-institutional collaborative effort led by John Schiller, Ph.D., Deputy Chief of NCI’s Laboratory of Cellular Oncology, scientists have discovered a non-invasive drug that can potentially identify uveal melanoma cells earlier than an ophthalmologist and target the cells before they metastasize. The drug that holds promise, called AU-011, is made of two important functional components. The first, a non-infectious virus-like particle similar to those used in human papilloma virus (HPV) vaccines, selectively seeks out cancer cells. The second component is an infrared dye with cancer cell-killing properties.

When AU-011 was injected into the eyes of rabbits with human-derived UM tumors and activated by an external infrared light source, it dramatically shrank their uveal melanomas. It also killed a variety of human cancer cells grown in petri dishes, including uveal and cutaneous melanomas, as well as ovarian, lung, breast, cervical, head and neck, and bladder cancers. The latter result suggests that the drug may be effective against a wide range of cancers in addition to uveal melanoma.

These preclinical results helped convince the U.S. Food and Drug Administration to fast-track a phase 1B/2 clinical trial, currently underway and sponsored by Aura Biosciences, to evaluate the safety of AU-011 in humans. “It is still early days, but the six patients treated with the drug so far have experienced no serious adverse side effects in the eye or systemically,” says Schiller.  Most patients have also experienced reductions in tumor size and there is evidence of an anti-tumor immune response, suggesting that the drug may be triggering the body’s natural ability to attack cancer cells.