Researchers uncover cause of genetic anomaly linked to cancer 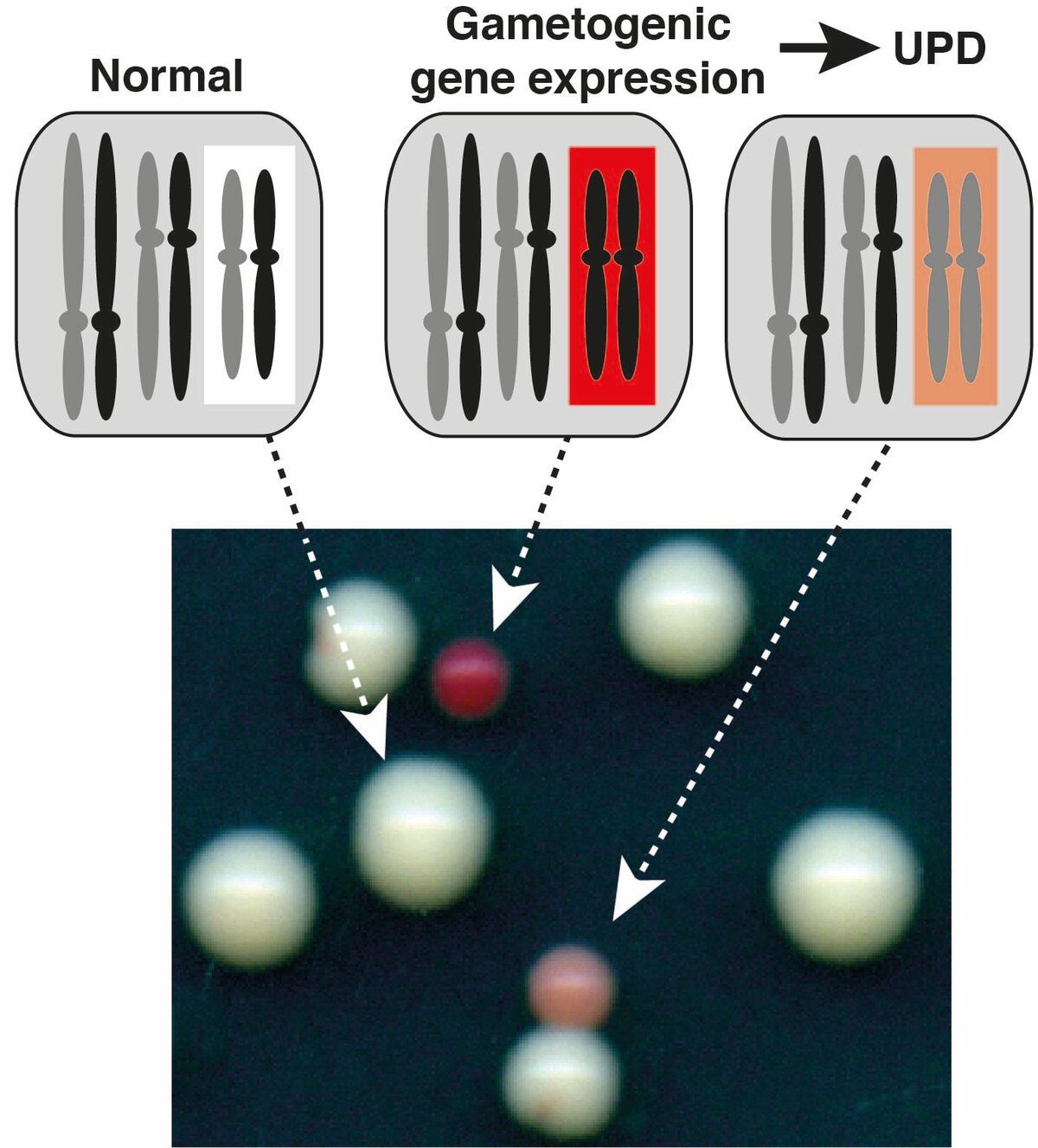 UPD occurs when cells contain two copies of a chromosome from one parent and none from the other parent. In this picture, UPD has occurred in the red and pink yeast colonies but not in the white colonies. Credit: H.D. Folco and S.I. Grewal.

A genetic anomaly called uniparental disomy (UPD) is associated with many diseases, including cancer, but scientists have not been able to identify what causes UPD. Now, Center for Cancer Research investigators have identified a specific genetic process that contributes to this abnormality.

“UPD is such a frequent phenomenon linked to various human diseases and disorders,” said Shiv Grewal, Ph.D., Chief of CCR’s Laboratory of Biochemistry and Molecular Biology. But factors that trigger UPD have remained largely unknown, he said. His team, led by CCR Staff Scientist Diego Folco, Ph.D., published their findings in the March 2 issue of Nature.

Most of the cells in our bodies, called somatic cells, should have one set of chromosomes from the father and one set from the mother. UPD occurs when a cell has two copies of a chromosome from one parent and none from the other parent. This condition has been linked to congenital disorders and cancers such as leukemia and lymphoma.

Grewal’s team studied the phenomenon in a yeast species called Schizosaccharomyces pombe. The researchers observed mutant yeast that were defective in a process called RNA interference (RNAi), which prevents untimely expression of genes. In these yeast cells, UPD frequently occurred.

The researchers then tried to figure out why defective RNAi led to UPD. RNAi prevents genes involved in meiosis, a type of cell division that produces cells with half as many chromosomes as the parent cell, from being expressed at the wrong time. Normally, meiosis should occur only in reproductive cells. Grewal’s team had previously discovered that RNAi also plays a role in assembling a DNA structure called heterochromatin, which helps ensure that chromosomes are properly separated during cell division. “We wondered which one of those two processes is linked to the UPD phenotype,” Grewal said.

To find out, the team examined yeast cells that were defective in silencing meiosis-related genes but had normal heterochromatin assembly. Those yeast cells still developed UPD, suggesting that abnormal expression of genes involved in meiosis had triggered the anomaly. The result was unexpected because most people would have assumed that problems with heterochromatin assembly were likely causing UPD, Grewal said. “That was a big surprise for us,” he said.

Next, the researchers investigated which gene was responsible for UPD. They discovered that when a gene encoding a protein called Rec8 was overexpressed in otherwise normal somatic cells, UPD occurred. Rec8 helps chromosomes stick together during meiosis.

The results suggest that in somatic cells, silencing the genes involved in meiosis is very important, Grewal said. When this process malfunctions, chromosomes may be incorrectly divided between cells, causing UPD.

A better understanding of UPD could lead to new cancer treatments, such as drugs that disrupt Rec8 function. If given to patients with an early cancer diagnosis, those therapies might prevent more chromosomal abnormalities. Scientists also have proposed that inducing UPD in patients with other diseases could eliminate chromosomes that contain genetic mutations and replace them with copies of normal chromosomes.

Grewal’s team is now looking for other genes that drive UPD. “We’ve been able to identify Rec8 as a major player,” he said. “But we think there are other factors involved in this process.”