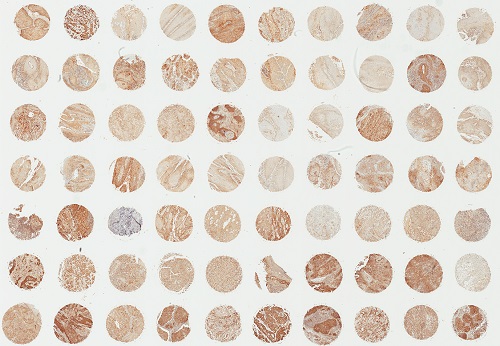 Skin cancer is the most common form of cancer and typically develops in sunlight-exposed skin. The vast majority of these cancers arise from basal or squamous cells, which help make up the skin’s outermost layer. Mutations in hepatocyte growth factor (HGF) or increased expression of its receptor, MET, have been identified in human squamous cell cancers (SCCs), although how this pathway may contribute to cancer formation is unclear. Since studies in mice have elucidated much about tumor biology, Stuart Yuspa, M.D., and Christophe Cataisson, Ph.D., of CCR’s Laboratory of Cancer Biology and Genetics, and their colleagues decided to study mice that overexpress HGF to understand the role the pathway plays in SCC.

The researchers found that HGF-overexpressing mice developed significantly more tumors than wild-type (WT) mice when treated with the carcinogen DMBA (7,12-dimethylbenzanthracene) followed by the protein kinase C (PKC) activator TPA (12-O-tetradecanoyl-13-phorbol acetate). Mice overexpressing HGF also developed multiple tumors after treatment with TPA alone. The investigators showed that tumors resulting from carcinogen treatment contained activating mutations in RAS, one of the most commonly altered gene in cancer, whereas none of the TPA-derived lesions showed RAS mutations. This result suggested that MET activation is sufficient to initiate skin SCC formation in a favorable environment, such as activated PKC. To test this idea, they mimicked wound healing by grafted HGF-overexpressing or WT skin cells on mice of the same genetic background, respectively. Encouragingly, only mice that overexpress HGF developed SCCs. In fact, transplantation of WT cells on HGF-expressing mice also induced tumor formation.

Next the scientists isolated skin cells from HGF-overexpressing mice and compared their behavior in culture to skin cells expressing activated RAS. Both types of cells exhibited a spindle-like shape and grew to a high density. Likewise, the cells showed similar activation of the epidermal growth factor receptor (EGFR) and the mitogen-activated protein kinase (MAPK) pathway, which lies downstream of EGFR. Inhibiting MET in HGF-overexpressing cells returned the cell shape to normal and reduced EGFR activity. Treatment with an EGFR inhibitor, however, had no effect on MET signaling, indicating a one-way interaction between the receptors.

The researchers found that the HGF-induced activation of EGFR was due to increased expression of EGFR ligands. To be effective, the ligands must be released from the cell surface, and they showed that ligand release depended upon activation of the protease ADAM17. In turn, ADAM17 activation required HGF-mediated stimulation of the kinase SRC and induction of the proteins iRhom1 and iRhom2. To determine whether EGFR activation was necessary for MET-driven cancer, the investigators grafted HGF-overexpressing cells on mice of the same genetic background, allowed tumors to form, and then treated the mice with the EGFR inhibitor gefitinib or a control. While the control had no effect, gefitinib treatment almost completely eliminated the established tumors, supporting the essential role of EGFR signaling.

The scientists then compared the global gene expression of activated RAS and HGF-overexpressing skin cells and found that their gene regulation was highly consistent. Using the top 372 consistent genes, they found activation of this RAS/MET signature in precancerous and cancerous human skin lesions, supporting the conclusion that MET signaling may occur early in many skin SCCs and persist through advanced stage. The researchers also demonstrated that MET and HGF were abundantly expressed in human skin SCC tissue arrays. Together these data demonstrate that HGF and MET contribute to skin SCC formation via the activation of EGFR in a pathway parallel to that of RAS.