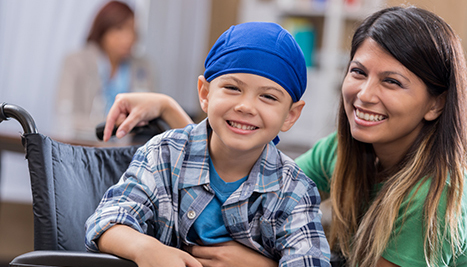 A collaboration of researchers from CCR, the University Children’s Hospital in Zurich and the Ospedale Pediatrico Bambino Gesù Research Institute in Rome has led to the discovery of potential new drug targets for an aggressive childhood cancer called alveolar rhabdomyosarcoma.

In a new study published April 26, 2017, in Cancer Discovery, CCR researchers have identified the mechanism behind a rare but extremely aggressive childhood cancer called alveolar rhabdomyosarcoma (ARMS) and have pinpointed a potential drug target for its treatment.

Nearly one in one million children under the age of 19 develops this disease. Most patients carry an abnormal fusion of two genes involved in muscle development, called PAX3-FOXO1 (P3F), which forces cells to become muscle cell precursors called myoblasts. These myoblast-like cells then proliferate but fail to differentiate into normal muscle cells, causing the formation of tumors that may aggressively metastasize to other parts of the body.

Researchers led by Javed Khan, M.D., Deputy Chief of CCR’s Genetics Branch, and others from the University Children’s Hospital in Zurich and the Ospedale Pediatrico Bambino Gesù Research Institute in Rome, found that P3F drives the cancer by abnormally enhancing the activity of genes involved in muscle cell development. It also stimulates premature expression of three genes called master transcription factors that induce the formation and proliferation of myoblasts.

The researchers also conducted extensive screening for drugs that might disrupt the chain of events triggered by P3F. Using mouse models, they found that drugs targeting a protein called BRD4, which helps P3F locate and transcribe its target genes, suppressed P3F activity and reduced myoblast proliferation. “P3F is the head of the snake that is cut off when BRD4 is targeted,” said Khan.

With the new target, the cure rate for metastatic ARMS could potentially be brought above the 20 percent currently achieved with traditional surgery, chemotherapy and radiation therapies. Khan and colleagues in the Pediatric Oncology Branch hope to begin testing the effectiveness of drugs that target BRD4 in clinical trials within the next year.