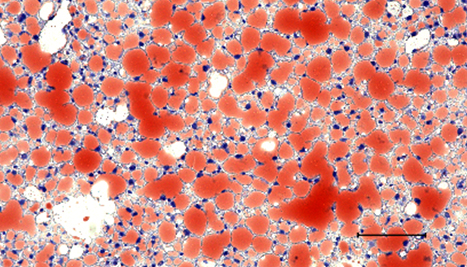 Liver sections from mice treated with “Oil Red O,” which stains lipids (fats) red. This image is from a mouse with NAFLD and shows large fat deposits. A drug called PT2385 was found to reverse abnormal fat deposits in the liver.
Photo courtesy of Frank Gonzalez

Researchers have identified potential new drug targets for the prevention and treatment of non-alcoholic fatty liver disease (NAFLD). The new study, which was a collaborative effort between scientists in the Laboratory of Metabolism at CCR and Peking University, was published October 9, 2017, in Nature Medicine.

NAFLD is a chronic condition in which fat accumulates in the liver. Over time, the presence of the excess fat can cause inflammation and cell damage – a condition called non-alcoholic steatohepatitis (NASH). Although NAFLD causes few or no symptoms, sufferers have a much greater likelihood of developing end-stage liver diseases including cirrhosis and hepatocellular carcinoma. An estimated 30 to 40 percent of Americans have NAFLD, according to a report by the Mayo Clinic, and it disproportionately affects obese individuals and those with type 2 diabetes.

“There is no current therapy to treat NAFLD, and it is of growing concern since it can progress to NASH and liver cancer,” says Frank Gonzalez, Ph.D., one of the lead authors and Chief of the Laboratory of Metabolism.

To investigate the mechanism behind NAFLD progression, a CCR team led by Gonzalez first looked at mice with fatty livers, type 2 diabetes and obesity. They found that these mice had elevated levels of a gene transcription factor called hypoxia-inducible factor 2 alpha (HIF-2α) in their small intestines compared with healthy mice. HIF-2α induces an enzyme called neuraminidase 3, which in turn increases levels of serum ceramides—a type of fat found circulating in the blood—which can cause adverse metabolic effects.

To explore this question, collaborators in China, directed by Changtao Jiang, a professor at Peking University School of Basic Medical Sciences, and Yue Wu, a professor at First Affiliated Hospital of Xi’an Jiaotong University, biopsied the lower small intestines of 18 lean and 17 obese individuals. The biopsies revealed a correlation between increased HIF-2α signaling and obesity and liver disease similar to that found in mice.

When the researchers inhibited HIF-2α in mouse intestines by disabling its gene expression or by providing a drug called PT2385, they found that the treatments prevented or reversed obesity, type 2 diabetes and fatty liver. Inhibiting neuraminidase 3 in mouse intestines had similar effects. PT2385 is a HIF-2α inhibitor currently in clinical trials for the treatment of renal cancer and has demonstrated a favorable safety profile in humans.

Although it is unclear whether treatment with PT2385 or neuraminidase 3 inhibitors would have the same efficacy in treating NAFLD, type 2 diabetes and obesity in humans as it did in mice, Gonzalez and Jiang said that they hope clinical trials in the U.S. and China will one day be able to answer this question.