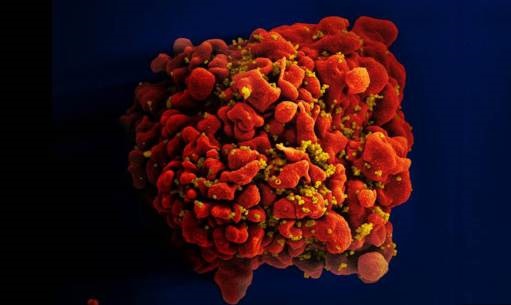 HIV (yellow) budding from an infected immune cell. A newly identified drug target may help rid the body of many HIV reservoirs and could free the immune system to fight certain cancers.

Scientists in NCI’s Center for Cancer Research have identified a new target for drugs that could help people who are HIV-positive eliminate recalcitrant pools of the virus. The research findings were published January 5 in Science.

HIV drugs today usually keep the virus at bay, but the virus reemerges after patients stop taking the drugs. To investigate why the virus is not controlled when patients stop therapy and to identify potential ways to enhance viral control, a multi-institutional team of scientists led by Mary Carrington, Ph.D., Senior Investigator in CCR’s Cancer and Inflammation Program, zeroed in on a group of proteins that serve a vital role in the immune response. The proteins, called human leukocyte antigens (HLA), help the body’s natural killer and T cells identify and attack HIV-infected cells.

The scientists analyzed the activity of two types of the protein, HLA-A and HLA-B, in nearly 8,000 black, Hispanic and white people from Africa, the United States and Switzerland. They found that individuals who expressed high levels of HLA-A and a particular variant of HLA-B tended to have high HIV viral loads, low T-cell counts and more rapid progression from being HIV-positive to the disease state known as AIDS. Expression of the two proteins varies enormously among individuals, with the highest-risk protein signatures found in about 7.8 percent of Africans/African-Americans and 9.6 percent of Caucasians.

In these high-risk individuals, the increased expression of the two proteins in turn increased the expression of a third HLA protein, called HLA-E, which binds to a receptor on the surface of natural killer and some T cells. When activated, the receptor, called NKG2A, impaired the ability of the immune cells to destroy HIV-infected cells. The scientists concluded that NKG2A is a promising drug target which, when blocked, might restore the ability of individuals to fight their HIV infections.

The immune-suppressing effects of HLA proteins have also been implicated in many cancers and autoimmune diseases. Therefore, drugs that block NKG2A may also help people fight these diseases. At least four clinical trials are currently underway testing the effectiveness of an antibody against NKG2A, called monalizumab, in combination with traditional therapies. The drug is being tested in leukemia, head and neck cancer, gynecologic malignancies, solid tumors and rheumatoid arthritis patients and also is being investigated to see if it can improve the success of stem-cell transplants.