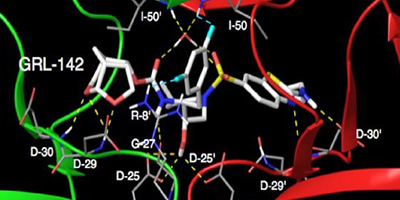 GRL-142 is a protease inhibitor, meaning that it binds to the HIV protease enzyme, preventing it from cutting larger viral proteins into the smaller pieces needed to build a mature HIV virus. HIV protease, in turn, consists of two subunits that join together, essentially forming a pair of molecular scissors. GRL-142 works by binding to these subunits, preventing them from joining and forming new HIV protease.
Photo Credit: Hiroaki Mitsuya, M.D., Ph.D.

Drugs that prevent the human immunodeficiency virus, or HIV, from making copies of itself – known as antiretroviral therapy, or ART – can now allow many people infected with HIV to, in many cases, live as long as uninfected individuals. But treatment can sometimes fail due to side effects and the emergence of HIV strains that have evolved resistance to ART. In a preclinical study published on eLife, Center for Cancer Research (CCR) investigators report developing GRL-142, a protease inhibitor that shows unprecedentedly high potency against HIV strains that have become resistant to multiple antiretroviral therapies.

Hiroaki Mitsuya, M.D., Ph.D., Senior Investigator in CCR’s HIV and AIDS Malignancy Branch, who led this study, had spearheaded the use of the first three ART agents (AZT, ddI, and ddC) against the virus in partnership with other researchers in CCR in the 1980s.

Most ART agents cannot cross the blood/brain barrier, allowing HIV to replicate in the brain unabated. This, in turn, may lead to HIV-associated neurocognitive disorders (HAND), whose symptoms range from tremors to memory loss. But when researchers gave rats GRL-142, its concentration in the brain reached levels 114-fold greater than the concentration needed to almost completely block HIV replication, suggesting that GRL-142 potently blocks HIV from infecting and replicating in the brain.

Overall, the findings point to GRL-142 as a promising HIV and HAND prevention and treatment. Mitsuya is currently testing GRL-142 in primates before moving to human clinical trials.