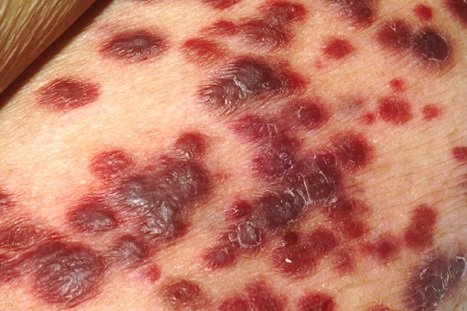 A collaborative effort by researchers at the National Cancer Institute (NCI) and Celgene Corporation, a global biopharmaceutical company, has yielded a possible new treatment for Kaposi sarcoma (KS), a cancer caused by a human gammaherpesvirus called Kaposi sarcoma-associated herpesvirus (KSHV).

KS arises in the cells that line the lymph or blood vessels, ultimately forming small, purplish tumors on the skin or inside the mouth. Less commonly, KS affects the lymph nodes, lungs, digestive tract, or other organs. The disease occurs much more frequently in HIV-positive individuals than in HIV-negative individuals.

Current KS therapies have limited effectiveness and can cause serious side effects. Antiretroviral therapies (ART) have succeeded in treating KS in some HIV-positive individuals, but many patients need additional treatment. HIV-negative individuals and those whose tumors don’t respond to ART often receive chemotherapy drugs such as liposomal doxorubicin or paclitaxel, which can reduce the size of KS tumors in about half to three-quarters of KS patients. But prolonged or repeated treatment with these drugs, which KS often requires, can cause detrimental wear and tear on the human body, including lowered blood cell counts, altered heart function, and nerve damage.

In a search for more effective KS treatments with fewer side effects, NCI and Celgene researchers tested pomalidomide, an immune system modulator marketed by Celgene and FDA-approved for treatment of multiple myeloma. In a phase I/II clinical study, researchers gave the drug to 22 genetically male participants with symptomatic KS, of whom 1 was transgender and 15 were HIV-positive.

The results of the study, published October 3 in the Journal of Clinical Oncology , showed that after an average of seven months of treatment with pomalidomide, tumors shrank or disappeared in 73% of the trial participants and the drug caused relatively few side effects. The drug was effective in both HIV-negative and positive individuals.

Pomalidomide’s effectiveness against KS and its reduced impact on blood, heart, and nerve cells compared to chemotherapy suggests that it may be a useful alternative to traditional therapies. In addition, its ease of administration (orally) could address the long-standing challenge of distributing treatment to people in resource-limited areas such as sub-Saharan Africa where KS rates are high.