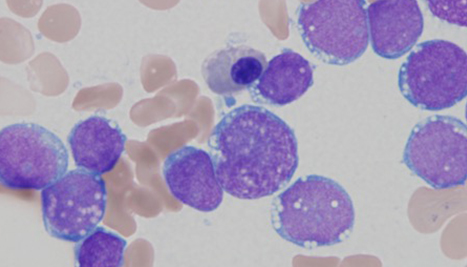 A new clinical trial being conducted by Center for Cancer Research physicians in acute lymphoblastic leukemia (ALL) will use a double-barreled approach that targets two proteins found on the surface of the cancer cells. In ALL, the most common type of childhood cancer, the bone marrow makes abnormally high levels of immature white blood cells called lymphoblasts. Using chimeric antigen receptor (CAR) T cells to attack cancer cells has shown promise as an emerging ALL treatment and will be the approach used in this new trial.

In CAR T-cell therapy, T cells—white blood cells that defend the body against disease—are collected from patients and engineered in the laboratory to express receptors that target specific proteins on the surface of cancer cells. These CAR T cells are prodded to proliferate in the clinic and then infused back into patients. The goal is that these cells will further proliferate in the body, hone in on the cancer cells bearing the surface protein target and kill them.

But the researchers ran into a similar problem with the CD22 therapy after seeing about the same relapse rates as they did in patients following CD19-CAR T-cell therapy. They’ve devised a new strategy of engineering CAR T-cells that simultaneously target CD19 and CD22. An upcoming phase I clinical trial led by Nirali Shah, M.D., of CCR’s Pediatric Oncology Branch, will test CD19/CD22-CAR T-cell therapy in patients with ALL that has relapsed or developed resistance to currently available treatments. This trial is now open and recruiting patients.

“CAR-T therapies have set a really high bar for phase I clinical trials,” Shah says. Participants in the trials of CD19- and CD22-CAR T-cell therapies had unprecedentedly high response rates—around 65 to 80 percent. Shah hopes that CD19/CD22-CAR T-cell therapy leads to similarly high response rates but with lower relapse rate than those seen in earlier trials.

“If this trial is successful, I think it would take us one step further in having CAR-T therapy lead to durable remission,” Shah says. “We can’t have this many patients relapsing.” She adds that multi-targeted strategies are “really the future of CAR-T therapy.”

Terry Fry, M.D., formerly of the Pediatric Oncology Branch, and Haiying Qin, a researcher in his lab, developed the CD19/CD22 CAR-T construct. By using this combination strategy, Shah hopes that if some lymphoblasts’ CD19 levels are too low for the CD19-targeted portion of the CAR T-cell therapy to detect then their CD22 levels will be high enough for the CD22-targeted portion to detect and vice-versa, capturing a broader swath of lymphoblasts.

In the upcoming trial, three participants will undergo a chemotherapy regimen to deplete their existing white blood cells, boosting the levels of cell-signaling proteins that promote the proliferation of CAR T cells. They will then receive an infusion of CD19/CD22 CAR T cells at a low dose. The researchers will continually monitor participants for toxic side effects. If no side effects emerge four weeks after infusion, three more patients will receive a higher dose. If the combined therapy turns out to be safe, she and her colleagues will move forward with treating more patients focusing specifically on testing its efficacy. Shah’s team expects to enroll about 50 participants total. Although their primary objective is to determine the maximum dose of CAR T cells that patients can safely tolerate, they will also assess patients’ response at each dose.

The trial will also examine samples of patients’ lymphoblasts to determine how CD19 and CD22 expression levels correlate with treatment response and how they change over time. This analysis could help researchers better understand the diversity of CD19 and CD22 expression levels among lymphoblasts and how it affects the ability of CAR T cells to target them.

Shah credits CCR’s leadership and fostering of seamless, cross-disciplinary collaboration for making her team’s multifaceted clinical trial possible. “Implementing CAR-T therapy takes a village, and there are so many partners involved in taking this work from bench to bedside and back to the bench,” she says. “CCR is the perfect environment for clinical translation of these novel strategies.”

The Center for Cancer Research is NCI’s internal cancer center, a publicly funded organization working to improve the lives of cancer patients by solving important, challenging and neglected problems in cancer research and patient care.  Highly trained physician-scientists develop and carry out clinical trials to create the medicines of tomorrow treating patients at the world’s largest dedicated research hospital on the campus of the National Institutes of Health in Bethesda, Maryland.