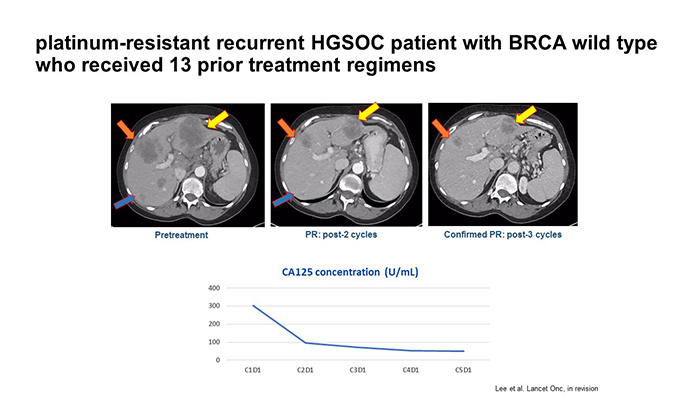 Trial participants received intravenous infusions of prexasertib every two weeks. The colored arrows point out tumors, which appear dark gray, in these CT scans from one participant. The scans show a decrease in the size of her tumors after the second round of treatment, followed by an even further decrease after the third round, at which point one of the tumors had completely disappeared.
Photo courtesy of Jung-Min Lee

Ovarian cancer has the highest mortality rate of all gynecological cancers. Women with advanced-stage disease, known as high-grade serious ovarian carcinoma (HGSOC), typically undergo surgery to remove their tumors, followed by platinum-based chemotherapy. But more than half of these patients develop resistance to platinum drugs, leaving them with few effective treatment options. Although the U.S. Food and Drug Administration (FDA) has not approved prexasertib for use in treating ovarian cancer or any other disease, interim findings from an ongoing phase II trial at the Center for Cancer Research, published in The Lancet Oncology, suggest these patients may benefit from receiving the drug. Led by Jung-Min Lee, M.D., an Investigator in CCR’s Women’s Malignancies Branch, this is the first phase II trial of prexasertib in ovarian cancer.

Prexasertib is a DNA-damaging agent that targets the cell cycle, a sequence of events in which the cell grows, makes copies of its DNA and divides. Checkpoint 1 (CHK1) and checkpoint 2 (CHK2) proteins pause the cell cycle to repair any DNA damage during this process. However, cancer cells proliferate much faster than normal cells, making them more susceptible to mistakes, including DNA damage. As a result, they have higher levels of CHK1 and CHK2. Prexasertib binds to these proteins, preventing them from pausing the cell cycle. The cancer cells then accumulate so much DNA damage that they die.

So far, they have completed the first cohort of the trial, whose findings they described in the Lancet Oncology paper. After two months of treatment, eight participants, or 33 percent of the enrollees, showed decreases in the size of their tumors. Their disease did not progress for a median of 7.4 months after starting treatment. Patients with recurrent platinum-resistant HGSOC, a group whose clinical outcomes are generally poor, particularly benefited from this treatment.

Lee and her team are still enrolling patients for the second cohort and expect to finish doing so by the end of this year. Their findings mark the first phase II trial results supporting the use of a CHK1/2 inhibitor as a single therapy to treat recurrent ovarian cancer in patients without mutations in BRCA. Until now, prexasertib, developed by Eli Lilly, had shown promise as an anticancer drug only in preclinical studies and a phase 1 trial.

Overall, the findings suggest prexasertib deserves further investigation for use in a patient population in need of treatment options. Presently, prexasertib has not been approved by the FDA for any treatment.