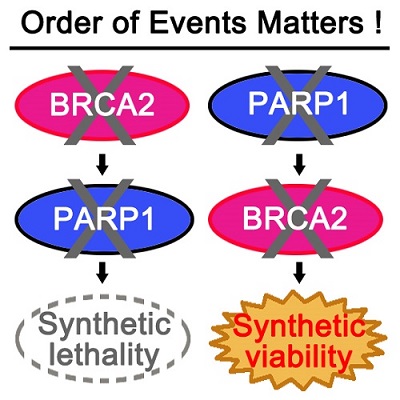 PARP inhibitors are drugs that block an enzyme involved in many cell functions, including DNA repair. PARP inhibition has been approved for treatment of advanced ovarian cancer with BRAC1 and BRAC2 mutations and is being studied in the treatment advanced breast, colorectal, and prostate cancer. Thus,  a new study by Center for Cancer Research scientists in the Mouse Cancer Genetics Program and the Laboratory of Genome Integrity, raises concerns that when patients with a BRCA mutation are treated with these kinds of drugs their normal cells may also be affected. They found while PARP inhibition can kill tumor cells, it may also promote tumorigenesis in individuals after treatment has stopped.

Cells lacking functional BRCA1 or BRCA2 are sensitive to PARP inhibitors, such as olaparib. The team examined the effects of olaparib on normal cells, i.e. cells that express functional BRCA2. Their results provide strong evidence that PARP inhibition may contribute to the viability of BRCA2-deficient cells—a key step in the transformation of a normal cell to pre-cancer stage.

The authors found the order of events matter. In BRCA2 deficient cells, PARP inhibition results in synthetic lethality, a condition that arises when a combination of mutations in two or more genes leads to cell death. However, when PARP is inhibited before BRCA2 is lost, cells survive and tolerate the loss by protecting stalled replication forks. Findings from this study, supported by experiments in mouse embryonic stem cells, demonstrated that treating mice with olaparib contributed to the survival of BRCA2-deficient cells. The scientists also provided genetic evidence to show that mutations in PARP1 contributes to tumorigenesis in mice when Brca2 is deleted. These results supported the scientists’ hypothesis that there can be a causal connection between olaparib treatment and tumorigenesis. More studies are needed to confirm these findings and how they apply in humans. This study was published in Nature Communications.