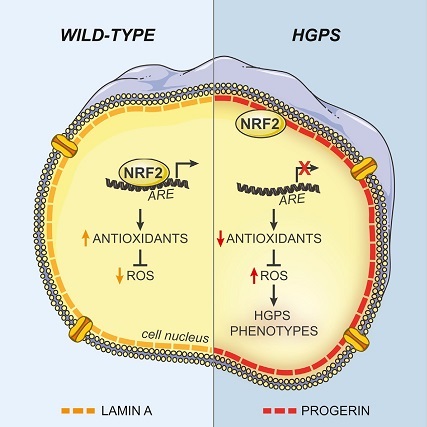 Hutchinson-Gilford progeria syndrome (HGPS) is a rare, fatal disease in which patients age prematurely. The disease is caused by production of progerin, a mutated version of the nuclear structural protein lamin A, which leads to numerous cellular defects and decreased numbers of mesenchymal stem cells (MSCs) through unknown mechanisms. Progerin is thought to also be important in normal aging since the protein accumulates in cells as people get older. Thus, understanding how progerin causes the defects observed in HGPS should, in addition to identifying therapeutic targets, provide insights into the natural aging process.

CAND1controls the substrate specificity of several cullin-containing E3 ubiquitin ligase complexes, key components of the cellular protein degradation machinery. A major target of the cullin 3-complex is the transcription factor NRF2, which has been implicated in longevity and stress resistance by regulating genes with antioxidant-response elements (AREs) in their promoters. Since oxidative stress has been implicated in HGPS and aging, the scientists decided to examine the status of NRF2 in HGPS cells.

They found that NRF2 protein stability and its nuclear-cytoplasmic shuttling were unaffected by the disease causing progerin protein. In contrast, NRF2 transcription activity was halved. To understand how progerin interferes with NRF2 function, they examined NRF2’s subnuclear localization and found that, like progerin, NRF2 accumulates at the periphery and in intranuclear aggregates in HGPS cells. They also found that NRF2 bound to progerin directly and more strongly than to lamin A. These data indicate that progerin impairs NRF2 transcriptional activity by sequestering NRF2 from its target genes in the interior of the nucleus.

The investigators next showed that knocking down NRF2 was sufficient to induce all tested HGPS defects in wild-type fibroblasts and exacerbated nuclear effects in HGPS cells. Loss of NRF2 led to reduced expression of antioxidant genes and a subsequent increase in reactive oxygen species (ROS), which were comparable to those in HGPS cells. In fact, treating normal fibroblasts with hydrogen peroxide to increase ROS recapitulated nearly all HGPS defects. Reactivating the NRF2 pathway, by expressing constitutively active NRF2 (caNRF2) or treating cells with small-molecule NRF2 activators, including FDA-approved Oltipraz, rescued most HGPS cellular defects, as did treating HGPS cells with the general antioxidant N-acetyl cysteine.

Finally, the scientists tested the effect of the NRF2 pathway on MSCs generated from HGPS patient fibroblasts. Loss of NRF2 in MSCs with a corrected wild-type lamin A gene was sufficient to mimic HGPS defects. Conversely, expression of caNRF2 in HGPS MSCs increased expression of antioxidant genes, reduced ROS, and thereby reversed cellular HGPS defects. In vivo expression of progerin or knockdown of NRF2 led to a loss of wild-type lamin A corrected MSCs whereas overexpression of caNRF2 or Oltipraz treatment restored the viability of HGPS MSCs. Together these data support an in vivo role of NRF2 as a driver mechanism in HGPS and they suggest activation of NRF2 as a potential therapeutic strategy in the disease.