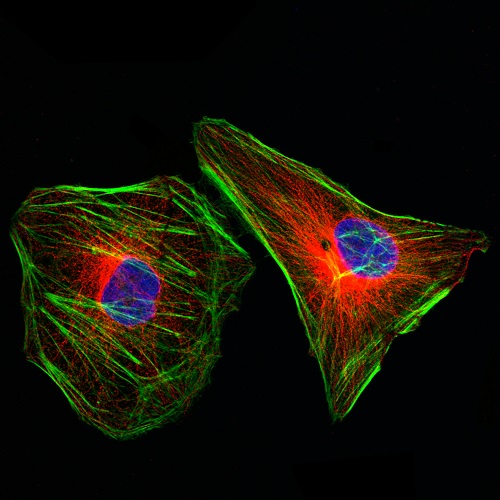 This image shows HeLa cervical cancer cells stained for the cytoskeletal proteins actin (red) and tubulin (green). Cancer cells spread in the body with the help of mutated genes that drive changes in the cells' cytoskeleton -- the protein filaments and microtubules that control cell shape and contribute to cell movement.

Now, in a study published April 14 in Science, scientists at the Center for Cancer Research and three other cancer research institutions show that immunotherapy treatments that resulted in complete regression of metastatic cervical cancer largely targeted two non-viral antigens.

The findings reveal the importance of considering nonviral antigen targets when designing effective immunotherapies for HPV-related cervical cancer. “This shifts the paradigm for the antigens to study and target in these viral cancers,” said Christian Hinrichs, M.D., an Investigator in the Experimental Transplantation and Immunology Branch and a lead author on the study.

The study also suggests that some patients may be treated with personalized, precision immunotherapies depending on whether their tumors express neoantigens or germline antigens. “We’re moving toward a gene engineering approach in which we can design defined antigen reactivity for each patient,” Hinrichs said.