New insights into the dual role of TGF-beta 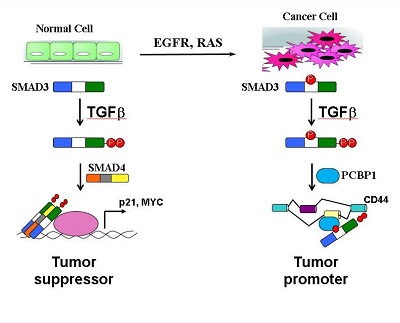 Smad3 regulates alternative splicing independent of its ability to regulate transcription.  In normal cells, TGF-beta-induced SMAD3 c-terminal phosphorylation enable it to be accumulated in the nucleus and form complex with SMAD4 to regulate transcription of many genes.  Oncogenic stimulation (EGFR and oncogenic Ras activation) results in T179 phosphorylation of Smad3, which mediates physical interaction of Smad3 with PCBP1 and plays a role in CD44 alternative splicing, which facilitates cancer progression by stimulating EMT and invasion.

The dual role of TGF-beta in cancer continues to challenge investigators in the field. TGF-beta is a well-known factor associated with tumor suppression in normal cells and yet promotes tumor progression in advanced stages of cancer. For years, the mechanisms that underpin this conundrum have not been fully understood.

Ying Zhang, Ph.D., senior investigator in the Laboratory of Cellular and Molecular Biology, has been exploring this problem by examining and characterizing several key molecules in the TGF-beta signaling pathway. Recently, she and her colleagues have shown that SMAD3—a transcription factor downstream of the TGF-beta receptors—possesses a previously unappreciated function in regulating cancer gene expression. The results of this study were published October 13 in Molecular Cell.

The research team found that in cancer cells, TGF-beta and receptor tyrosine kinase pathway activations induce SMAD3 binding with a protein called PCBP1. This SMAD3-PCBP1 complex is found in the pre-mRNA of a large number of genes that are critical for cancer cell invasion and metastasis. Moreover, the existence of the pro-metastasis SMAD3-PCBP1 complex means that it may compete with the SMAD3-SMAD4 complex. This is important because in advanced gastrointestinal and pancreatic cancers, mutations of SMAD4, which often occur late in tumor progression, may in fact become a pro-tumorigenic event because of the release of SMAD3, thus making it available to bind with PCBP1. Based on this new insight, it may be effective to use existing TGF-beta receptor or SMAD3 inhibitors to block SMAD3-PCBP1 interaction, thus depriving tumors the metastatic advantage from producing high levels of TGF-beta.