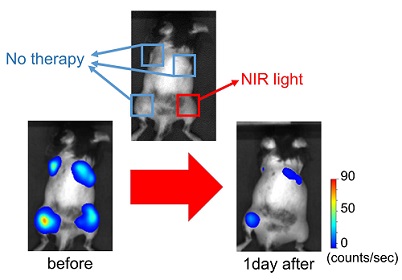 Scientists at the National Cancer Institute’s Center for Cancer Research have empowered the immune systems of mice to rid their bodies of tumors with a new kind of immunotherapy. The therapy, which works by clearing a tumor’s microenvironment of cells that normally hinder the body’s immune response, not only causes treated tumors to shrink, but also spurs the immune system to attack tumors elsewhere in the body.

The approach is a new form of near-infrared photoimmunotherapy (NIR-PIT), which uses near-infrared light to activate a cell-destroying molecule on the surface of specific cells. By engineering the light-activated molecule to bind to immunosuppressive cells, the researchers, led by CCR senior investigator Hisataka Kobayashi, M.D., Ph.D., have devised an immunotherapy that could be broadly effective against many types of cancer.

Many tumors trigger an immune response in the body, generating cytotoxic T cells and natural killer cells that recognize the cancer. But immune suppressor cells that infiltrate and surround tumors prevent those cells from mounting an attack. “We just crush the immunosuppressive cells, and let [the cytotoxic cells] go to attack the tumor cells,” Kobayashi says of the new photoimmunotherapy, reported August 18, 2016, in Science Translational Medicine. “That’s enough to cure even distant tumors.”

Dr. Kobayashi’s lab developed NIR-PIT as a way to eliminate specific cells from a select environment. It uses a therapeutic molecule with two elements: a light-absorbing molecule linked to an antibody that binds to target cells. Once this antibody–photoabsorber conjugate binds to its target inside the body, it can be activated with near-infrared light. The resulting reaction causes target cells to rapidly burst and die, without harming nearby cells.

Dr. Kobayashi and colleagues in NCI’s Molecular Imaging Program first used NIR-PIT to trigger the death of cancer cells directly; one such therapy is being evaluated as a treatment for inoperable head and neck tumors in a Phase I clinical trial.

Next, the team devised a strategy for locally eliminating immunosuppressor cells. They generated an antibody-photoabsorber conjugate that recognizes CD25, a marker on immunosuppressive regulatory T cells (Tregs), and injected the conjugate into mice. Then they used near-infrared light to activate the photoabsorber.

Tregs at the treatment site died within minutes. And with the microenvironment suddenly free of Tregs, cancer-fighting cells got to work. “Those guys immediately attack the tumor cells,” Dr. Kobayashi says. “And once they crush the tumor, they can circulate and find the same tumor cells growing in other parts of the body. Then they start crushing those cells, because they are already educated to attack the tumor cell.”

Treated tumors shrank within a day. And tumors that were left untreated—that is, not exposed to near-infrared light—shrunk too.

Mice in the study had implanted tumors derived from lung, colon, or thyroid tumors, but Dr. Kobayashi expects the therapy will be effective against many tumor types. Cancers that are known to provoke immune responses on their own, including melanoma, lung cancer, and colon cancer, are good candidates, he says. “We don’t need a specific molecule to target the cancer cell, we can just target the Treg cells,” he says. “So we don’t need a variety of antibodies to cover numerous types of cancer. I think this will have a great impact on the clinic.”