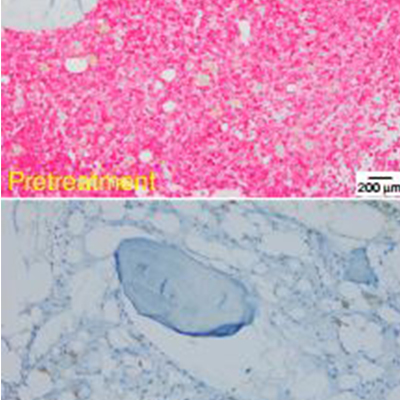 Chimeric antigen receptor (CAR) T-cell immunotherapy has emerged as a promising treatment for pre-B cell acute lymphoblastic leukemia (B-ALL), the most common type of childhood cancer. B-ALL is characterized by an overproduction of immature white blood cells called lymphoblasts. Around 70 to 90 percent of patients whose B-ALL has relapsed or developed resistance to chemotherapy enter remission after CAR T-cell therapy targeting CD19, a protein found on the surface of lymphoblasts.

But an estimated one-third of the patients who enter remission following CD19-targeted therapy suffer a relapse often associated with loss of CD19 expression. In a phase I trial, Center for Cancer Research investigators showed that a CAR T-cell therapy targeting CD22, another protein found on lymphoblasts, can lead to remission even in patients who have relapsed after CD19-CAR T-cell therapy. An early version of this CAR construct was initially developed in the Pediatric Oncology Branch and reported in Blood in 2013. This trial, whose findings appear in Nature Medicine, marks the first human study of a CD22-CAR T cell therapy.

CAR T-cell therapy involves collecting T cells, disease-fighting white blood cells, from patients and engineering them in the laboratory to express receptors that target specific proteins on cancer cells. The resulting CAR T cells are grown in the clinic to expand their numbers and then infused back into patients.

Terry Fry, M.D., of the Pediatric Oncology Branch and Crystal Mackall, M.D., previously the Chief of the Pediatric Oncology Branch, led the team of researchers. They generated CD22-targeted CAR T cells from 21 children and adults with B-ALL that had relapsed or become resistant to currently available therapies. The researchers focused on CD22 based on encouraging results from clinical trials of other types of therapies that target CD22, including one developed by Ira Pastan, M.D., co-Chief of the Laboratory of Molecular Biology.

Overall, 12 of 21 participants, or 57 percent, showed complete remission, which lasted a median of six months. Eight of these patients relapsed. Evaluation of individual cells in an NCI laboratory led by Dr. Maryalice Stetler-Stevenson using a technique known as flow cytometry revealed a decrease in CD22 expression on the surface of their lymphoblasts, suggesting a correlation between CD22 surface expression and relapse after CD22-CAR T cell therapy.

The researchers then developed a CAR T cell that simultaneously targets CD19 and CD22, which may make it harder for lymphoblasts to develop resistance, requiring them to lose surface expression of both proteins at once.

“We want to attack the cancer cell from multiple angles,” Fry says. “It’s an opportunity to explore combinatorial CAR approaches as a way of potentially minimizing the likelihood of leukemic resistance.” This combination CAR T-cell therapy eradicated B-ALL cells in cell cultures and mice. To determine whether the therapy is also effective in humans, Fry and colleagues are now testing it in an ongoing clinical trial.