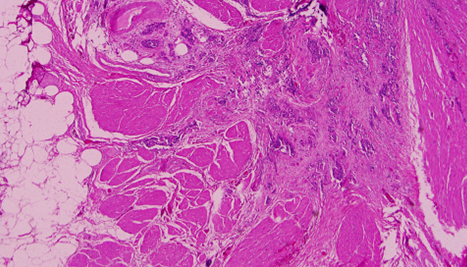 In muscle invasive bladder cancer (MIBC), the tumor grows deep into the muscle that forms the bladder wall, making it more likely to spread. The current standard of care for MIBC involves treatment with a chemotherapy combination of drugs, including cisplatin, followed by radical cystectomy, which is surgery to remove the bladder and nearby organs. Due to multiple factors, many patients don’t receive chemotherapy before surgery, or if they receive chemotherapy, they may not respond to it. Other patients have poor kidney function, which makes them ineligible for cisplatin treatment. To address these treatment issues, Center for Cancer Research (CCR) investigators are launching a phase III trial of an intravenous immunotherapy drug known as pembrolizumab, marketed as Keytruda, that could offer an option for these patients.

Pembrolizumab targets the PD-1 receptor protein found on T cells, white blood cells that defend the body against disease as part of an immune response. The binding of PD-1 to the protein PD-L1, found on cancer cells, switches the T cells off, protecting tumor cells from immune attack. By blocking this binding, pembrolizumab releases the brakes from the immune system, allowing T cells to attack tumor cells.

Earlier this year, the U.S. Food and Drug Administration approved four drugs targeting the PD-1/PD-L1 pathway, including pembrolizumab, for metastatic bladder cancer patients who don’t respond to chemotherapy or are ineligible for cisplatin-based chemotherapy. These approvals were based on clinical trials showing response rates of 15 to 20 percent.

“To improve outcomes in patients with bladder cancer, we want to move these effective therapies to to patients who have an earlier stage of disease,” says Andrea Apolo, M.D., Lasker Clinical Research Scholar in CCR’s Genitourinary Malignancies Branch and the trial’s principal investigator. To that end, Apolo’s team is using pembrolizumab to treat chemotherapy-resistant and cisplatin-ineligible MIBC patients who have undergone cystectomy but don’t yet show signs of metastasis.

The researchers will determine whether pembrolizumab, given shortly after cystectomy, boosts these patients’ overall survival and disease-free survival. If so, “this would become the new standard of care for this disease state,” Apolo says. The trial is being run through the Alliance for Clinical Trials in Oncology and began recruiting participants in November 2017 with plans to enroll up to 739 patients at more than 100 sites across the country.

Phase III trials such as this are rare in CCR. “We generally focus on phase I or small phase II trials to look for safety and efficacy, but this is a wonderful opportunity to do extensive correlative work not only at NCI but at multiple institutions,” Apolo says. “It’s going to be a tremendous collaborative effort.”

Post-surgery, trial participants will receive either pembrolizumab or clinical observation without further treatment, which is the current standard of care. The treatment group will receive pembrolizumab intravenously once every three weeks for a year and the observation group will check in with their doctors over the phone every three weeks and receive a clinical exam every six weeks for a year. Both groups will then continue to get routine clinical exams for the next five years. The researchers will consider the pembrolizumab treatment an improvement over the standard of care if participants in the treatment group survive longer than those in the observation group.

Apolo’s team will also examine tumor tissue samples from participants collected at the time of their surgery. The researchers will examine the tissue for PD-L1 and other markers, which they later plan to correlate with patient outcomes, including survival and disease-free survival, hopefully leading to insights that could improve treatment. The CCR’s seamless integration of basic and clinical science facilitates this bench-to-bedside-to-bench research. Trial participants will also complete surveys assessing quality of life, fatigue, pain and urinary and bowel function.

If successful, pembrolizumab treatment administered shortly after cystectomy may offer hope to a group of high-risk MIBC patients with few treatment options. “It could improve their overall survival,” Apolo says. “That is our ultimate goal because this is a really aggressive cancer.”