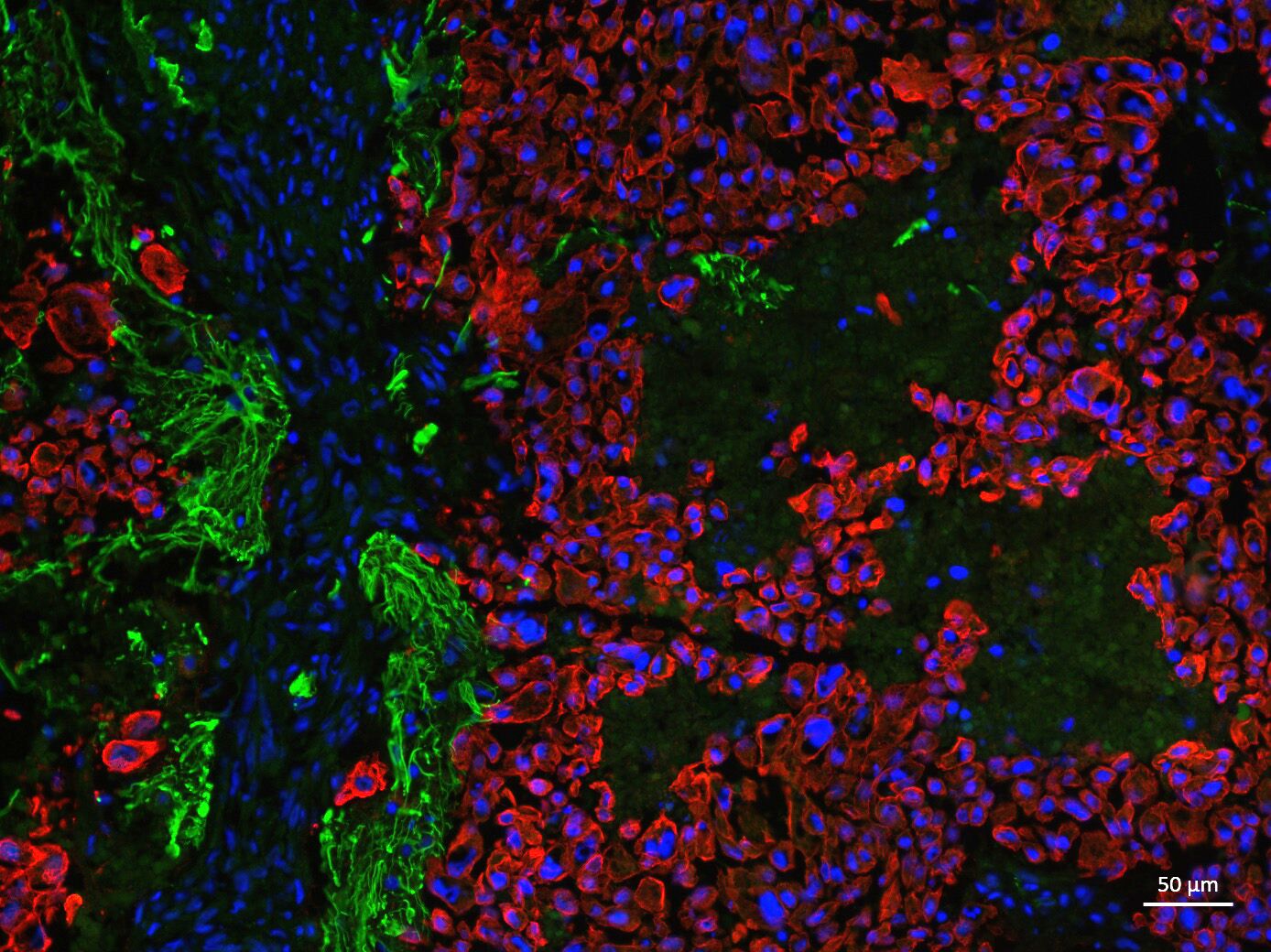 In some breast cancer patients, tumor cells (in red) spread to the brain. CCR researchers are investigating whether the drug temozolomide in combination with another drug can prevent these brain lesions.
Credit: Brunilde Gril, Ph.D.

If a woman is diagnosed with breast cancer in the early stages of the disease, her chances of survival are high. But more often in patients with advanced cases of breast cancer, cells from the breast tumor can break off and travel to other parts of the body—including the brain. Women who develop such brain metastases live for an average of only about six months to a year from the time the brain lesions are detected. Once the cancer is metastatic, “it’s not curable, as a general rule,” says Alexandra Zimmer, M.D., Staff Clinician in CCR’s Women’s Malignancies Branch.

Dr. Zimmer and her colleagues started a trial in September to investigate whether a drug called temozolomide (Temodar) can reduce the chances that new brain lesions will recur in patients who have already been treated for brain lesions.

If the cancer reaches the brain, physicians are very limited in terms of effective treatments, Zimmer says. Treatments may not penetrate the barrier between the blood and lesion very well or may not reach all lesions uniformly. Physicians try to remove the tumors surgically or destroy them using stereotactic radiation, which involves applying concentrated radiation to the lesions. If several lesions have spread into the brain, patients can undergo whole brain radiation therapy, but the tumors often return even after these types of treatment.

A recent animal study by Patricia Steeg, Ph.D., Deputy Chief of the Women’s Malignancies Branch at CCR, and her colleagues, pointed to a possible solution. The researchers injected mice with breast cancer cells and found that the animals were much less likely to develop brain tumors if they were given temozolomide a few days after injection. Even at very low doses of the drug, the prevention was effective. “That was a hint” that temozolomide might be able to help prevent brain lesions in human patients, Zimmer says.

Temozolomide is already used to treat tumors that originate in the brain, such as glioblastoma, but the drug hasn’t yet been tested in breast cancer patients who develop tumors that have metastasized to the brain.

Based on some of the results from Steeg’s mouse study, Zimmer’s team decided to study temozolomide’s effect in humans. In the current trial, the researchers will focus on HER2-positive breast cancer patients who have already been treated for a limited number of brain metastases with localized therapies such as stereotactic radiation or surgery. One group will receive T-DM1, while others will get both T-DM1 and temozolomide. Then patients will undergo MRI scans every six weeks to see if new tumors appear in the brain. The researchers will also sample cerebrospinal fluid to monitor levels for potential tumor DNA.

Currently, about half of HER2-positive patients whose brain metastases have been treated with stereotactic radiation develop new lesions within a year. Zimmer’s team hopes to reduce that figure to about 35 percent. The researchers will also monitor side effects and try to determine the optimal temozolomide dose.

About 125 patients will be enrolled, and the trial is scheduled to last five years. If the treatment reduces the risk of new metastases to the brain, the researchers may test the drug on a larger group of patients. Future trials may include women who have not shown evidence of brain metastasis but may be at higher risk for developing such lesions.

Although temozolomide is unlikely to cure existing breast cancer that has metastasized to the brain, Zimmer hopes to at least lengthen the patients’ survival. To date, treatment for this type of metastasis hasn’t been shown to be as effective as many clinicians and patients would like. The trial is an important step, she says, toward helping women “whose lives have been cut short.”

For more information on this trial visit:  https://ccr.cancer.gov/womens-malignancies-branch/alexandra-s-zimmer.