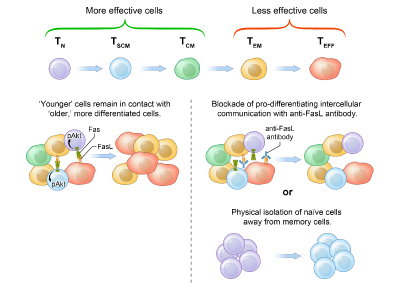 Adoptive cell transfer (ACT) is an experimental immunotherapy with the potential to cure a subset of patients with advanced cancer. ACT involves T cell harvesting from a patient, expansion in the laboratory, and genetic modification with an antigen receptor or selection of cells that recognize tumor antigens. Following expansion, antitumor T cells are re-infused into the patient following an immune cell depleting regimen. These T cells then seek out, attack, and kill the patient’s cancer. Given its efficacy, ACT is poised to become a standard therapy in the coming years, but many fundamental questions related to the best source, expansion, and quality of cells to transfer remain. For example, ACT in mice using cells derived from naïve T cells (TN) have superior antitumor activity compared to similar numbers of cells from memory T cells (TMem), yet most clinical trials do not specifically enrich for naïve cells. This is because it was previously unknown whether TMem can negatively influence the potency of TN-derived cells.

In order to address this question, Christopher Klebanoff, M.D., Nicholas Restifo, M.D., of CCR’s Surgery Branch, and their colleagues studied the differentiation and antitumor potency of CD8+ TN-derived T cells, which recognize the melanoma antigen gp100, activated in the presence or absence of CD8+ TMem cells. The researchers generated the TMem by transferring T cells into a mouse host and subsequently vaccinating the host with a recombinant vaccinia virus encoding gp100. Twenty-eight days later, they harvested the TMem, dividing them into central memory (TCM) and effector memory (TEM) populations based on cell surface markers. Using a process similar to many current human ACT protocols, the investigators primed the TN alone or with TCM or TEM cells in the presence of anti-CD3/CD28 antibodies and interleukin-2. Alone, the TN differentiated into all three antigen-experienced cell subsets: the highly potent stem cell memory (TSCM) and TCM subsets and the less potent TEM subset. In contrast, the presence of the TCM or TEM cells during priming led to a significant accumulation of TEM cells and a reduction in TSCM cells from TN-derived progeny. Increasing the ratio of TMem to TN, as is frequently seen in cancer patients, further increased the TEM population with a corresponding loss in TSCM and TCM cells, signifying a dose-dependent enhancement in differentiation of the TN-derived cells in the presence of TMem.

The scientists next examined the influence of TMem on TN transcription and effector functions. They observed a reduction in CD62L, a marker of less differentiated T cells, on TN grown in the presence of TMem due to reduced gene transcription. Similarly, genes associated with TN homing and co-stimulatory markers were down-regulated. The researchers also found that TN grown with TMem had increased effector functions, as evidenced by enhanced granzyme B content and interferon-γ secretion. Microarray analysis revealed that TN grown with TMem had expression profiles more similar to TMem than to TN with decreases in TN-associated transcription factors and increases in TMem transcription factors and effector molecules. They also assessed the antitumor activity of the TN grown alone or with TMem in mice with established subcutaneous B16 melanomas and found impaired cell expansion, persistence, and anticancer activity of TN primed with TMem compared to those primed alone. The investigators termed this process precocious differentiation and determined that it also occurs in vivo after co-transfer of TN and TMem.

Finally, the investigators asked whether modulating Fas signaling could affect the therapeutic activity of TN-derived cells. They primed TN in the presence of TMem with the anti-FasL or control antibody or primed TN alone in the presence of oligomerized FasL or a vehicle control. After cell expansion, the scientists transferred equal numbers of CD8+ T cells from each condition along with the recombinant vaccinia virus expressing gp100 and interleukin-2 into mice bearing established subcutaneous B16 melanomas. Blockade of Fas signaling significantly improved tumor regression and mouse survival in TN grown with TMem but had no effect on TN expanded alone. In contrast, enhancing Fas signaling during TN priming alone dramatically impaired tumor regression and mouse survival. These results led the researchers to conclude that TMem-induced precocious differentiation negatively impacts treatment efficacy of TN-derived cells but this activity can be rescued by blocking Fas signaling. Based on this data, the investigators have initiated a clinical trial (NCT02062359) in which TN will be enriched using magnetic beads prior to genetic modification with a T cell receptor conferring recognition of the cancer rejection antigen NY-ESO-1 to test whether enrichment results in better clinical outcomes than unselected cell populations.