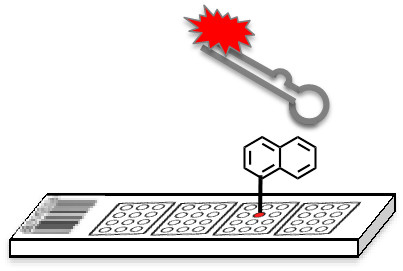 Dr. John S. Schneekloth, Jr. and his team from the Chemical Biology Laboratory, Center for Cancer Research, have identified a new class of compounds that block the action of a microRNA associated with the development of human cancers, cardiovascular diseases and immune disorders. The findings were published December 13, 2016, in ACS Chemical Biology.

This particular microRNA impedes the action of tumor suppressors and is found in abnormally high levels in a large variety of solid tumor types. In a series of biophysical assays, the investigators confirmed that members of the class of compounds they identified using the SMM bound to a precursor of miR-21, which prevented it from reaching its mature, active state.

The molecules identified in this study must undergo pre-clinical testing in cellular models of cancer to determine their clinical relevance. In the meantime, the SMM screening technique demonstrates its potential to identify molecules that block microRNAs linked to human disease.