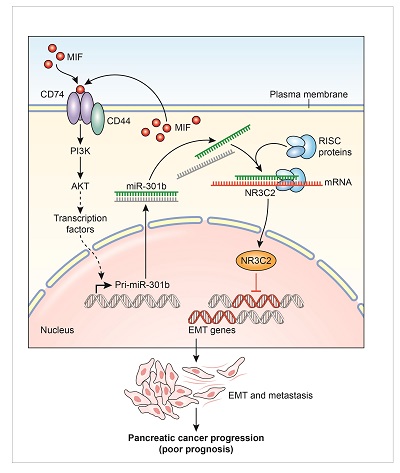 Schematic representation of the regulation of NR3C2 by Macrophage Migration Inhibitory Factor (MIF) in pancreatic cancer progression and disease aggressiveness.

Pancreatic cancer, while relatively rare, is an aggressive disease ranked as the fourth leading cause of cancer-related death in the US. Because most patients are diagnosed at an advanced stage and their tumors resist available treatments, novel therapeutic targets are urgently needed. Macrophage Migration Inhibitory Factor (MIF) is a proinflammatory cytokine that is elevated in pancreatic ductal adenocarcinoma (PDAC), the most common form of pancreatic cancer, and may provide a molecular link between inflammation and cancer, though the mechanism is unknown. S. Perwez Hussain, Ph.D., of CCR’s Laboratory of Human Carcinogenesis, and his colleagues decided to investigate the role of MIF in PDAC.

The researchers first compared microRNA (miRNA) profiles of MIF-high and MIF-low tumors from a test cohort of 69 patients with PDAC. They identified 53 differentially-expressed miRNAs between the groups and, of these, five that correlated with poor survival. Validating their results with a second cohort of 41 patients with PDAC, the investigators again found elevated miR-301b in MIF-high tumors, which was associated with poor patient survival. A panel of eight pancreatic cancer cell lines also showed a positive correlation between MIF and miR-301b expression. Knocking-down MIF reduced miR-301b expression while overexpressing MIF increased miR-301b levels, indicating that MIF positively regulates miR-301b in pancreatic cancer.

Next the scientists wanted to identify the target of miR-301b. They compared potential targets with genes inversely correlated with miR-301b and positively associated with survival in their test cohort. This approach identified 109 genes, which were narrowed to five through additional analysis and validation. Testing the regulation of these genes in two pancreatic cancer cell lines, the investigators showed that overexpressing miR-301b significantly downregulated one target, nuclear receptor subfamily 3, group C, member 2 (NR3C2). Overexpression of MIF in these cell lines also reduced NR3C2, and MIF suppression of NR3C2 was blocked by inhibiting miR-301b. Likewise, endogenous NR3C2 expression negatively correlated with MIF and miR-301b in the pancreatic cancer cell lines. These results point to a regulatory pathway in PDAC where MIF induces miR-301b, which, in turn, targets and reduces NR3C2.

The researchers then investigated the function of NR3C2. They found that overexpressing NR3C2 in two pancreatic cancer cell lines with the lowest endogenous NR3C2 expression inhibited their proliferation, colony formation, and migration and invasion abilities. Elevated levels of NR3C2 also enhanced the cells’ sensitivity to the chemotherapy gemcitabine. Since undergoing epithelial-to-mesenchymal transition (EMT) is associated with cancer metastasis and MIF-high PDAC tumors are highly metastatic, the investigators asked whether NR3C2 played a role in regulating EMT. They found that lowering NR3C2 levels led to the accumulation of mesenchymal features, including reduced E-cadherin and increased zeb1, N-cadherin, and vimentin, demonstrating that NR3C2 may act as a tumor suppressor by inhibiting EMT. In fact, enhanced migration, invasion, and mesenchymal phenotypes in MIF-overexpressing cells could be blocked by miR-301b depletion or enhanced NR3C2 expression. Thus, MIF-induced aggressiveness in PDAC depends on targeting NR3C2 through upregulation of miR-301b.

To see whether MIF could be a potential therapeutic target, the scientists used a mouse model of PDAC. Importantly, genetic ablation of MIF disrupted the MIF/miR-301b/NR3C2 pathway and resulted in reduced metastasis and prolonged survival compared to mice expressing MIF. Finally the researchers examined the relevance of the MIF/mir-301b/NR3C2 pathway in human cancers. They found that lower NR3C2 levels in tumors from three independent cohorts and The Tumor Genome Atlas correlated with poorer patient survival, indicating that the pathway is clinically relevant.

Together, these studies have identified a novel pathway in which MIF promotes pancreatic cancer progression by inhibiting NR3C2 via induction of miR-301b. This pathway may serve as a promising therapeutic target for patients with PDAC.