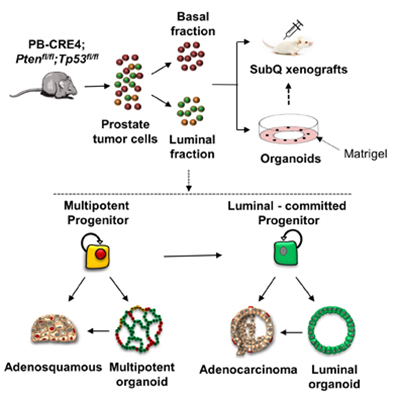 The prostate gland is composed of an outer layer of basal cells that express TP63 and cytokeratins 5 and 14, an inner layer of luminal secretory cells that express the androgen receptor (AR) and cytokeratins 8 and 18, and rare neuroendocrine cells that express synaptophysin and chromogranin A. The majority of prostate cancers display a luminal phenotype, but little is known about the stem/progenitor properties of transformed prostate cells. Some studies in mouse models indicate that most regenerative adult prostate stem cells are unipotent while others hint at a rare population of multipotent progenitor cells in the castrate and intact prostate. Similarly, definitive evidence of tumor-initiating stem cells in primary prostate cancer is lacking.

To begin addressing these issues, Kathleen Kelly, Ph.D., of Chief of CCR’s Laboratory of Genitourinary Pathogenesis and her colleagues decided to characterize the stem/progenitor cell populations in a mouse model of aggressive prostate cancer in which the genes Pten and Tp53 are eliminated from prostate epithelial cells. They used flow cytometry to analyze the expression of cancer stem cell markers on Pten/Tp53-null tumor cells. Basal epithelial cells expressed high levels of CD49f, while luminal cells expressed medium or low levels of the protein. The expression of prominin-1 (PROM1) further subdivided the luminal cell population. The researchers then employed fluorescence-activated cell sorting to recover the three populations: CD49fhi, CD49flo/PROM1+, and CD49flo/PROM1neg. The first two populations each included around 20 percent of the epithelial cell fraction, and the distribution profiles were similar in mice with and without Pten and Tp53expression. However, analysis of cytokeratin expression in the three populations differed significantly between wild type and Pten/Tp53-null cells, suggesting different proportions of cell lineages.

The investigators grew the separated basal and luminal populations under organoid-forming conditions in order to assess the growth of stem/progenitor cells. Organoids grew from both luminal and basal populations, though the CD49flo/PROM1neg cells rarely formed organoids and were not studied further. The percentage of organoid-forming units (OFUs) from the basal fraction of Pten/Tp53-null cells was similar to wild-type cells. In contrast, there was a 10-fold expansion of OFUs in the PROM1+ cells from the tumor-bearing prostates, which was greater than in cells lacking just Pten.

The organoids grown from the Pten/Tp53-null basal cell fraction were composed of tightly packed layers, sometimes with a small lumen, and expressed TP63 with cytokeratin 5 in peripheral cells and cytokeratin 8 in luminal cells. These so-called multi-lineage organoids lacked AR expression, whereas wild type CD49fhi fractions produced organoids with significant AR staining. Together these results suggest that basal cells in thePten/Tp53-null model have a tumor-specific, committed basal phenotype. Organoids derived from PROM1+ cells, on the other hand, varied in size. Larger organoids were multi-lineage, while smaller single-layer organoids contained only luminal cells. The multi-lineage organoids had large, twisted lumens that seemed to be the result of hyper-proliferation compared to wild type PROM1+ organoids. Like their basal counterparts, the luminal-cell derived organoids had limited AR expression.

Because of differences in tumor pathogenesis and cell distributions, the researchers analyzed organoids from age-matched Pten/Tp53-null and Pten-null prostates. They found that the Pten-null luminal cells produced few luminal organoids. Instead, the structures produced by Pten-null basal and luminal fractions were multi-lineage and resembled the deregulated growth of basal multipotent progenitors, which agrees with previous reports.

The scientists then subcutaneously injected cell suspensions of wild type or Pten/Tp53-null organoids into immune-compromised mice. As expected, the wild type cells failed to grow. Similarly, the Pten/Tp53-null basal cell-derived organoids failed to produce tumors. In contrast, the PROM1+ organoids produced tumors with either an adenocarcinoma phenotype, indicating a luminal-committed progenitor, or an adenosquamous phenotype, implicating a multipotent progenitor. To analyze the tumor-initiating activity of Pten/Tp53-null cells isolated directly from tumors, the researchers performed in vivo limiting dilution studies of the CD49fhi and PROM1+ fractions. Both were able to form tumors with a similar tumor-initiating cell frequency and demonstrated luminal-committed and multi-lineage tumor-initiating activity. While this result contrasts with the lack of tumor formation by CD49fhi organoids, they suggest this may be because basal tumor-initiating cells are not routinely captured in organoid culture.

Finally, the investigators evaluated the sensitivity of the organoid-producing progenitors to in vivo castration. Androgen deprivation led to smaller tumor cell size and increased apoptosis as measured by caspase 3 cleavage. Two weeks after castration, they observed similar proportions of basal and luminal cells compared to intact tumors. Organoid cultures of the CD49fhi fraction showed no significant changes in OFUs following castration. PROM1+ organoids, both multi-lineage and luminal, were reduced after castration, but a fraction of the progenitor cells appeared to be castration tolerant. Likewise, treatment with the androgen receptor inhibitor enzalutamide slowed but did not prevent the growth of PROM1+ organoids from non-castrated tumors.

Taken together these studies characterize the stem/progenitor phenotypes of primary prostate tumors initiated by loss of the common tumor suppressors, Pten and Tp53, and reveal the presence of two classes of luminal progenitors, which may influence treatment response.