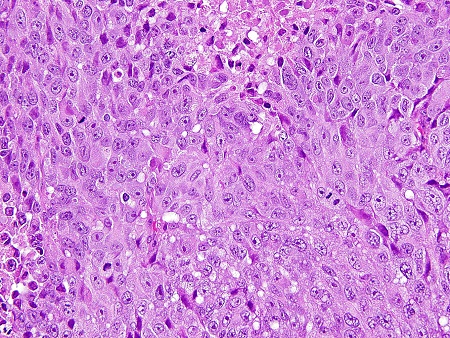 Investigators tested an immunotherapy known as adoptive cell transfer (ACT) in patients with metastatic uveal melanoma, which is shown here. Metastatic tumors were surgically removed from patients with uveal melanoma, and the T cells isolated from these tumors were tested for the ability to recognize and respond to the tumor cells. T cells found to “react” with the tumors were grown in the laboratory to sufficient numbers to then be infused into the patients.

Uveal melanoma is a rare cancer that develops in the cells that produce the pigment melanin in the middle layer of the eye, the uvea. Patients with this form of melanoma have few treatment options. Though immunotherapy has been successful in treating some patients with melanoma of the skin, the results in uveal melanoma have been disappointing. In an ongoing phase II trial, investigators from the Center for Cancer Research have been the first to demonstrate that adoptive cell transfer (ACT) immunotherapy is effective in some patients with metastatic uveal melanoma. Their findings were published April 7, 2017, in The Lancet Oncology.

In adoptive cell transfer immunotherapy, T cells, white blood cells that fight disease, are collected from patients and grown in the laboratory to sufficient numbers for infusion back into the patient to help the immune system kill cancer cells. Udai S. Kammula, M.D., Investigator in the Surgery Branch, and colleagues surgically removed metastatic tumors from patients with uveal melanoma and isolated T cells from these tumors. These T cells were then tested for the capacity to recognize and respond to the patient’s tumor cells. Prior to receiving this ACT, patients received chemotherapy to eliminate their existing T cells.  This allowed the T cells grown in the laboratory and optimized for tumor response to direct their attack on the cancer cells.

Of 20 patients who were followed for clinical response in the study, 7 had at least 30 percent reduction in the size of their tumors. Of these, one patient has had complete tumor regression with no detectable residual cancer almost two years after the ACT treatment. The findings suggest ACT may be a promising treatment for uveal melanoma, particularly for patients found to have strongly reactive T cells in pre-screening tests. These findings also suggest this approach could be helpful with other cancers currently considered resistant to immunotherapy, such as colon and pancreatic cancers.