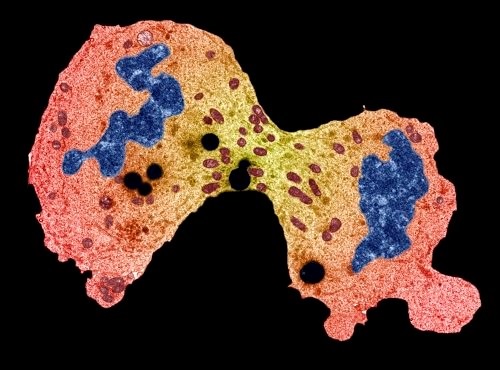 New studies from scientists in the NCI Center for Cancer Research’s (CCR) Pediatric Oncology Branch suggest that an experimental drug called STA-8666 could be an effective treatment for the childhood cancers Ewing sarcoma and rhabdomyosarcoma. In mouse models of these diseases, STA-8666 eliminated tumors and prolonged survival beyond that of animals treated with a related drug, irinotecan.

Irinotecan, an FDA-approved chemotherapy, is often used as second-line therapy in patients with Ewing sarcoma and rhabdomyosarcoma. However, irinotecan does not act directly to block tumor growth. Instead, it must be converted by the liver to its active form, a molecule called SN-38. This conversion is inefficient and produces toxic byproducts, limiting how much irinotecan can be administered and how much active compound reaches patients’ tumors.

Researchers have been exploring better ways to get the active compound, SN-38, to tumors. In a study reported in the journal Oncotarget, CCR physician-scientist Lee Helman, M.D., and colleagues tested STA-8666, a drug conjugate in which SN-38 is linked to the heat shock protein 90 (HSP90) inhibitor STA-8663. HSP90 inhibitors interfere with the growth of cancer cells but are also considered good vehicles for other drugs because they remain in tumors for prolonged periods while minimizing exposure to healthy tissues.

Dr. Helman and his colleagues administered the conjugated drug to mice with human pediatric sarcomas and found that it caused tumors to shrink more and take longer to return than they did with irinotecan treatment. Many of the animals treated with the drug conjugate experienced sustained complete regression. As a group, STA-8666-treated mice survived significantly longer than mice treated with irinotecan. Given these results, the study authors recommend undertaking clinical trials to evaluate STA-8666’s safety and effectiveness in treating patients with childhood sarcomas.