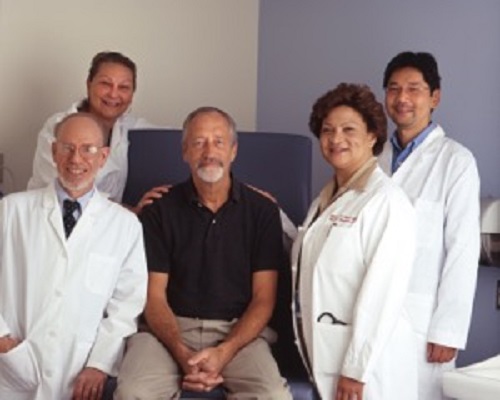 The entire bench to bedside clinical team involved in the translation of the TARP therapeutic vaccine platform gather around one of their patients.

Results from a pilot clinical trial found that TARP, or T-cell receptor gamma chain alternate reading frame protein, vaccination slowed prostate-specific antigen (PSA) rise in the majority of patients with stage D0 prostate cancer. The vaccine, which was developed and tested by investigators in the Vaccine Branch of the National Cancer Institute’s Center for Cancer Research (CCR), provides a novel treatment option for men with early stage disease. The results of this study were published in OncoImmunology.

In the United States, prostate cancer is the second leading cause of cancer-related death in men. Stage D0 prostate cancer is the stage where a patient’s primary tumor has been removed and no tumor is detected through radiology, but rising PSA indicates disease recurrence. Treating such stage D0 patients with standard therapies such as hormone therapy has not resulted in improved overall survival.

Past studies have shown that TARP (discovered by Ira Pastan, M.D., and colleagues in CCR’s Laboratory of Molecular Biology) is highly expressed in primary and metastatic prostate tumors, as well as hormone-sensitive and castrate-resistant tumors, making it an ideal tumor antigen (target) for vaccination—at any stage of the disease. Further, in a clinical trial of prostate cancer vaccines antibodies to TARP correlated with increased median survival and PSA doubling time.

Building on this information, Jay A. Berzofsky, M.D., Ph.D., Chief of the Vaccine Branch, and his colleagues, conducted a study in mice to test the TARP vaccine. Fragments of the TARP protein were identified that were recognized by T lymphocytes of mice expressing a human HLA molecule and then also by human T cells. These peptide fragments were modified to improve their ability to induce an immune response that killed human cancer cells expressing TARP. The most effective peptide fragments were combined in a vaccine tested in stage D0 prostate cancer patients by Lauren V. Wood, M.D., Clinical Director of the Vaccine Branch, working with Dr. Berzofsky.

Forty-one patients, ages 46 to 82, with stage D0 prostate cancer enrolled in the TARP vaccination trial between September 2009 and December 2011, at the NIH Clinical Center in Bethesda, Maryland, for a median duration of 75 weeks at the time of this analysis. Prior to enrollment, CCR investigators assessed the stage D0 prostate cancer patients’ PSA rate of increase. The men then received the TARP vaccine every three weeks for up to 5 vaccinations. A booster vaccine was administered to the men at week 48 and week 96. The Vaccine Branch investigators then compared the rate of PSA rise at 24 and 48 weeks after vaccination with the pre-study baseline readings.

Dramatically, 72% of patients who reached 24 weeks—and 74% who reached 48 weeks—had a decrease in the rate of rise of PSA compared to their pre-vaccine baseline, indicating slowing tumor growth. By another measure, the TARP vaccine also resulted in a 50% decrease in median tumor growth rate. Eighty-percent of the patients exhibited cancer-fighting TARP-specific T cells. Based on the promising results of this study, the investigators have opened a randomized placebo-controlled phase II clinical trial of an expanded TARP peptide vaccine in stage D0 prostate cancer patients. If that also proves successful, they plan to test the vaccine in more advanced stages of prostate cancer.