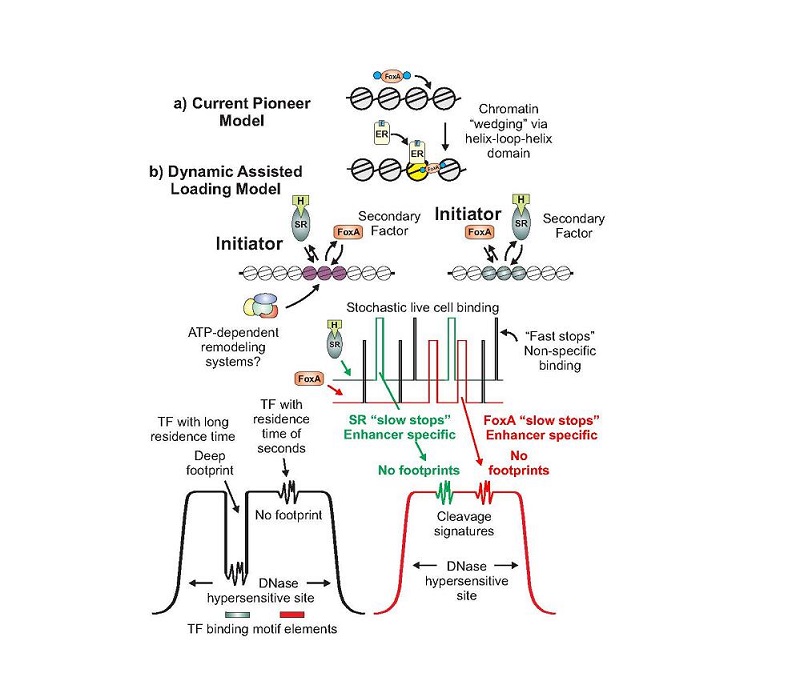 Fig. 1. An alternate view of pioneer factor action. Steroid receptors play key roles in breast cancer. These factors gain access to regulatory elements by complex mechanisms involving local chromatin remodeling. Creating these open sites is often described (a) as “pioneering,” affected by proteins with special properties.  Hager and colleagues propose an alternative mechanism for this process. They describe a more symmetric process (b), wherein steroid receptors can program FoxA1 binding, and vice versa. They also find by single molecule tracking that all of these factors are highly mobile on enhancers in living cells. Furthermore, while some proteins produce strong footprints on their binding sites, the receptors and FoxA1 leave no detectable footprint, consistent with their rapid exchange. An alternate model, dynamic-assisted loading, is proposed to explain these unexpected results.

The estrogen receptor (ER) is a key regulator in breast cancer initiation and progression. A widely discussed model (Fig. 1a) proposes that forkhead box protein A1 (FoxA1) acts as a pioneer factor in cancer by binding and penetrating closed chromatin to allow access by transcription factors (TFs), including ER. This model suggests that FoxA1 binding sites determine where ERs localize but not vice versa. Recent evidence, however, has shown that knocking out the estrogen receptor can alter a number of FoxA1 binding sites. To better understand the interplay between FoxA1 and TFs, Gordon Hager, Ph.D., of CCR’s Laboratory of Receptor Biology and Gene Expression, and his colleagues examined the binding profiles of FoxA1, ER, and the glucocorticoid receptor (GR).

The researchers used three breast cancer cell lines since the FoxA1-ER interaction is important in breast cancer development and the FoxA1-GR interaction in breast cancer has not been extensively explored. They left the cells untreated or treated them with 17β-estradiol (E2) or dexamethasone (Dex) and analyzed binding site overlaps between FoxA1 and ER or GR, respectively, using ChIP-seq. A large number of FoxA1 sites did not overlap with either steroid receptor (SR), even though some sites were altered in the presence of hormone. A portion of the sites, supporting the classical pioneer model, overlapped with SR binding regardless of hormone treatment. Interestingly, another group of sites overlapped with SR binding only if hormone was present. These results imply a more complex relationship between FoxA1 and these SRs than previously thought.

The investigators decided to focus on the sites that overlap with SRs only after hormone treatment or that were altered by hormone treatment but did not overlap with SRs. They examined the distances between FoxA1 binding and SR binding or steroid response elements (SREs). A small fraction of FoxA1 sites were within 100 base pairs (bp) of the SR or SRE, suggesting these were sites where FoxA1 binding could lead to SR binding. The scientists also found a large number of SREs within 10,000 bp of FoxA1 sites not bound by SRs, which was surprising if FoxA1 truly acts as a pioneer factor for these SRs. Examining the different classes of overlapping sites, they found the majority of classical pioneer sites had an SR bound within 100 bp. Unexpectedly, nearly all FoxA1 sites that overlap with an SR only in the presence of hormone had an SR site within 100 bp, and over half were within 10 bp, suggesting FoxA1 might be recruited to these sites by activated SRs.

The researchers then examined the potential differential hormone regulation of FoxA1 binding. They demonstrated that ER and GR can recruit FoxA1 to specific sites in all three breast cancer cell lines (Fig. 1b), implying the SRs may act as “initiating factors” for FoxA1 at these sites. Supervised clustering analysis of the ChIP-seq data revealed clusters in which FoxA1 binding was gained with hormone treatment. Furthermore, the investigators observed increased chromatin accessibility at these sites, implicating SRs in chromatin remodeling to open these sites.

Through single molecule tracking (Fig. 1b), the scientists recorded relatively fast dwell times for FoxA1 in untreated cells, which contrasts with the proposed stable binding, pioneer model. Hormone activation of SRs further decreased the stability of FoxA1 binding to chromatin. In fact, the residence times of ER and GR were comparable to those of FoxA1. Footprinting studies further supported the dynamic nature of FoxA1 binding. The researchers were unable to detect DNA protected by FoxA1 with or without hormone present, similar to results for ER and GR (Fig. 1b).

Taken together, these studies show that FoxA1 is not stably bound to chromatin, but is highly dynamic and reprogrammable by both GR and ER. The investigators propose an alternate model for recruitment of these factors, termed Dynamic Assisted Loading. In this view, the “initiating” activity of these proteins is both symmetric and dynamic. This study introduces a novel interpretation of the mechanism by which multiple hormone receptors contribute to the progression of breast cancer. Future studies will explore the potential role of assisted loading in multiple cancer types.