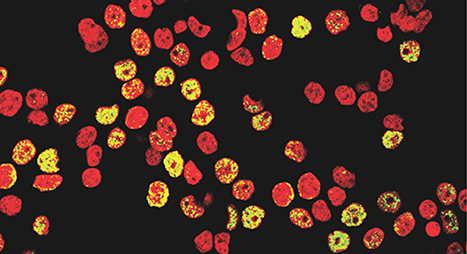 Researchers analyzed DNA damage markers to study the effects of three drug candidates on cancer cells. In this image of human lymphoma cells, the marker gamma-H2AX is shown in green, and nuclei are in red.
Credit: Christophe Redon and William Bonner, Developmental Therapeutics Branch, CCR.

A clinical trial in dogs suggests that three DNA-damaging drugs are effective treatments for canines with cancers similar to those that develop in people. Studying cancer treatments that work in dogs could lead to a benefit in humans as well. Researchers identified the drugs as potential alternatives to existing similar drugs that suffer from several limitations.

“All three drugs are very active,” says Yves Pommier, M.D., Ph.D., Chief of CCR's Developmental Therapeutics Branch. One of the drugs, which had not originally been chosen to progress through the development pipeline, turned out to be the most effective of the three and is now entering a phase I trial in humans. The findings appeared online July 30, 2018, in Clinical Cancer Research.

The drugs in this study block an enzyme called DNA topoisomerase 1 (TOP1). As part of normal transcription and replication processes, TOP1 untangles DNA by clipping strands and “gluing” them together. But the drugs stop TOP1 after the clipping stage, preventing reconstruction and hence killing mutated cancer cells.

Clinicians already use TOP1 inhibitors, called camptothecins, to treat ovarian, lung, colon and other cancers. But these drugs are chemically unstable and have a short half-life in the blood; one of them, irinotecan, can cause diarrhea so severe that it can be life-threatening. Some cancer cells also can develop resistance to the treatments.

The drugs identified by Pommier’s team are called LMP400, LMP776 and LMP744. After testing them in mice, the team selected the first two to proceed to human trials. But for a trial in dogs with lymphoma, the researchers decided to test all three. Because effective treatments aren’t available for these animals, many pet owners were willing to enroll them in the trial to give their dogs a chance at a healthier, and hopefully longer, life, Pommier says. The dogs had to be 15 kilograms and still mobile to be eligible.

The team tested varying doses of the drugs on 84 dogs. The researchers monitored tumor size, observed side effects and measured drug levels in the blood. By analyzing tumor biopsies, they also determined the amount of drug retained, measured TOP1 levels and looked for signs of DNA damage.

Among dogs who received LMP400 or LMP776, about one-third showed a significant reduction in tumor size. But LMP744 performed the best: tumors shrank significantly in about 80 percent of treated dogs. The drug was effective even at low doses. “We didn’t expect it to be that potent,” Pommier says. LMP744 may have worked well because it accumulated at high concentrations in the tumors, analyses suggest.

In addition, the three drugs did not cause abnormal levels of diarrhea. The animals experienced bone marrow suppression at higher doses, but this side effect could be mitigated in humans by providing hormones to stimulate the bone marrow, Pommier says. Such hormones are likely not available for dogs. Human patients also could be prescribed lower doses to reduce the risk of bone marrow suppression.

Phase I human trials are complete for LMP400, nearly finished for LMP776, and underway for LMP744. In future trials, Pommier hopes to test the drugs in patients with tumors deficient in DNA repair because those cancers are likely more sensitive to the treatments.