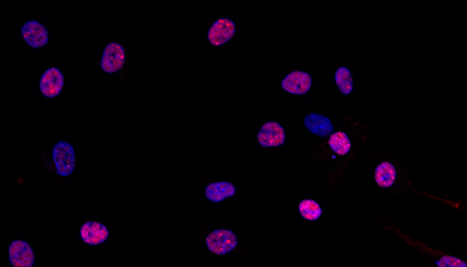 Human endothelial cells infected with KSHV. DNA is staiend in blue and the KSHV protein, LANA, is stained in red.
Photo courtesy of Joseph Ziegelbauer

A team of researchers from CCR discovered evidence of viral circular RNAs from Kaposi sarcoma herpesvirus (KSHV) in cells in the laboratory, a finding strengthened by a parallel discovery of these unique RNAs in lymph nodes from patients infected with diseases related to KSHV. Some of these viral circular RNAs can affect cell growth, so this discovery may add to our understanding of how cancer is regulated. The findings appeared November 19, 2018, in Proceedings of the National Academy of Sciences (PNAS).

Their research also showed that a human circular RNA acts as an antiviral agent in response to infection from KSHV. KSHV is a potent virus that causes Kaposi sarcoma as well as primary effusion lymphoma and a form of Castleman disease.

Through an approach he calls “dumpster diving for treasures,” Joseph Ziegelbauer, Ph.D., Investigator in the HIV and AIDS Malignancy Branch, and his team first searched through previously unexplored parts of gene sequencing data to discover the new viral circular RNAs.

Circular RNAs differ from linear forms of RNA in that their ends are connected, which gives them their circular shape. This unique structure makes them resistant to degradation from certain enzymes. They are also more stable than their linear counterparts and can bind to other RNAs or RNA-binding proteins.

Taking advantage of CCR’s unique relationship with the NIH Clinical Center, the team then examined patients’ lymph nodes to determine if these new viral circular RNAs could be found in human tissues. The confirmatory findings helped answer some research questions as well as pave the way for new areas of inquiry.