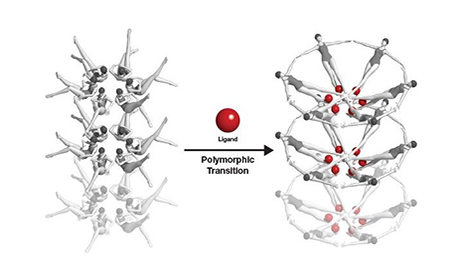 After ligand binding, riboswitch RNA molecules packed into micro- and nanocrystals rearrange themselves into a new crystal form. Large conformation changes triggered by ligand binding appear to cause the molecules to transition in unison, like synchronized swimmers.

Using an ultrafast, high-intensity radiation source called an X-ray free-electron laser (XFEL), scientists have captured an atomic-level picture of an RNA structure called a riboswitch as it reorganizes itself to regulate protein production. The structure they visualized has never before been seen, and likely exists for only milliseconds after the riboswitch first encounters its activating molecule.

The study, published November 14, 2016, in the journal Nature, represents the first time researchers have visualized the molecular structure of a biomolecule in such a transient form directly by ligand diffusion using XFEL in real time. The breakthrough suggests that researchers can now capture snapshots of molecular structures quickly enough to see even the fastest biological processes unfold.

The study was carried out by an international team from the Center for Cancer Research at the National Cancer Institute, the Center for Free-Electron Laser Science in Germany, the Linac Coherent Light Source at Stanford University, Arizona State University, and Johns Hopkins University. The study was led by Yun-Xing Wang, a Senior Investigator in CCR’s Structural Biophysics Laboratory.

Wang’s lab has been studying riboswitches, structures at the ends of some messenger RNA molecules that reconfigure themselves in the presence of a ligand to alter gene expression. From biophysical experiments, the team had reasoned that when the adenine riboswitch binds to its ligand, its structure changes twice, passing through a short-lived configuration before adopting the ligand-bound form that others had observed.

The intermediate state is so short-lived that its structure could not have been determined using conventional tools. While transient states have been seen before using large crystals or in photoactivated systems, combining XFEL with micro- and nanocrystals gave Wang’s team an opportunity to capture a ligand-triggered intermediate state during its brief existence.

“Almost all proteins, RNAs, and DNAs interact with ligands or substrates and undergo certain conformation changes when they react. The ability to visualize these changes is critical to understanding how biomacromolecules perform their functions,” says Wang. “In the past, people studied these kinds of reactions or interactions between molecules via diffusion mostly indirectly using various means. When studying directly in some cases, they need large crystals and the structural changes associated with reactions or interactions could not be too large to damage crystals, and those studies are not in real time. With our method, we are now able to directly visualize the structures and changes in real time.” Such a capability has not been possible in the past sixty-plus years of the crystallography history.

Wang explains that XFEL generates extremely bright X-ray light in pulses measured in femtoseconds, or quadrillionths of a second. The pulses last less time than it takes light to travel the width of a human hair, and an infinitely small fraction of the duration of a chemical reaction. For XFEL structural biologists, that speed is equivalent to having a very fast shutter on a camera. “Under femtosecond eyes, everything is static,” Wang says. “You can catch anything as it happens.”

Scientists in Wang’s lab prepared tiny crystals of the RNA—so small that a ligand could quickly and evenly diffuse through them. XFEL’s exceptionally bright light was essential for studying crystals of this size, and allowed the team to capture the riboswitch in its intermediate state.

Surprisingly, the team also discovered that after ligand binding, the RNA molecules packed into the their micro- and nanocrystals rearranged themselves into a new crystal form, presumably due to the large conformation changes that transformed the intermediate state into the riboswitch’s final ligand-bound form. Wang likens the transition, which has never before been seen in biomacromolecular crystals triggered by ligand, to synchronized swimmers moving in carefully choreographed unison. The observation suggests that with crystals of this size, XFEL could be used to capture the structures that form during biochemical reactions from beginning to end.

By using XFEL to collect serial images of macromolecules in action, researchers can essentially create movies of biological processes with atomic-level detail, Wang says. “In the past, people have studied structure mostly in a static three dimensional space—x, y, z. XFEL will allow us to study real biomolecular reactions in four dimensional space—x, y, z, plus t—time.”