Cracking the finger code: an interview with CCR’s Susan Mackem 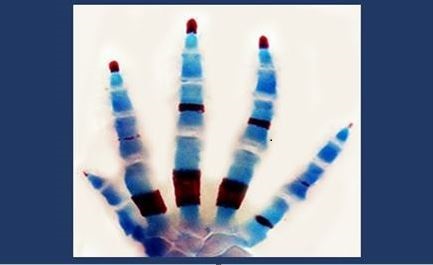 The creation of the digits in our hand—the thumb, index-middle-ring fingers and pinky—begins early in development, but little is known about the exact programming that occurs to produce the different digit types. Investigators in the Cancer and Developmental Biology Laboratory, (CDBL), Center for Cancer Research, provide the first genetic evidence of how the tuning of signals sets digit identity by studying the effects of dysregulation (abnormal regulation) in several mutations.

This study has relevance to cancer biology since dysregulation of many of the same signaling pathways comes into play during tumor development, said Susan Mackem, M.D., Ph.D., Senior Investigator, CDBL. This work also has broad appeal—not only to scientists interested in limb development and adaptive evolution—but to anyone interested in the mechanisms that govern the morphogenesis (development of shape) of complex structures, she concluded.

What is the most important finding of your study?

Our results, in a mouse model, highlight how digit joints and the bony segments between them (phalanges) arise coordinately in an alternating, periodic fashion from a pool of progenitor cells (cells that differentiate to form another kind of cell) located in the tips of the digits of early embryos. We found that the spacing and sizes of phalanges and joints, which contributes to their unique features, is regulated by the level of bone morphogenetic protein (Bmp) signals from the adjacent interdigit webbing, a tissue present in all embryos, including human, and in some adult species such as ducks. This protein induces bone formation and plays an important role in organ development. The Bmp signaling level is in turn regulated by the balance of two transcription factors (5’Hoxd and Gli3).

What spurred your interest in conducting this study?

The number of phalanges and joints are key features of digit ‘identity’ and are central to limb functionality and evolutionary adaptation, but little was known about how their numbers and sizes are regulated to produce different digit types. We capitalized on analyzing the opposite digit phenotypes in mutants of 5’Hoxd and Gli3 transcription factors, which function antagonistically in genetically altered mice, allowing us to determine what signaling activity is changing in concert with the digit phenotypes.

What did your research uncover?

We show the first genetic evidence that digit identity is regulated by neighboring interdigital signaling under the control of antagonistic 5’Hoxd and Gli3 gene regulators. The balance of 5’Hoxd-Gli3 sets the net Bmp signaling level in different interdigits to regulate the phalangeal-joint spacing of adjacent digit progenitors that is characteristic for that digit. To demonstrate this, Bau-Lin Huang, Ph.D., a Postdoctoral Fellow in my lab, generated new tissue-specific tools to delete or alter gene function selectively in the interdigital tissues that we suspected were involved in signaling to the progenitor pools in the digit tip.

What are your next steps?

We plan to study the requirements for maintaining the undifferentiated progenitor zone in embryonic digit tips. Other signals (such as Fgfs) are likely to contribute to the balance between progenitor maintenance, proliferation and differentiation. Understanding how this zone is regulated during development could provide a first step in learning more about how to reactivate such progenitors during regeneration (at least of digits) postnatally. This will be of value in the recovery from cancers in which normal tissues are destroyed or removed in the course of therapeutic intervention. Additionally, learning about how different types of progenitor populations are normally controlled increases our understanding of the different ways in which cancer stem cells may arise and thrive and how they can best be intercepted—allowing us to devise more effective cancer treatment strategies.