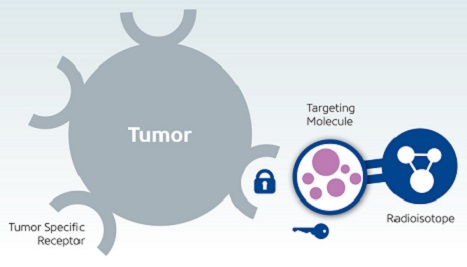 About 10 to 17 percent of the rare tumors, pheochromocytomas and paragangliomas (PHEOs/PGLs) metastasize, making them inoperable. Chemotherapy, currently the only standard treatment available for metastatic PHEO/PGL, is often ineffective. Researchers hope targeted radionuclide therapy, which involves a drug consisting of a radioactive atom tethered to a molecule that targets tumor cells, could slow progression of PHEO/PGL.

Pheochromocytomas (PHEOs) and parangliomas (PGLs) are rare tumors that arise from the same type of nerve tissue and produce an excessive amount of stress hormones, which can cause anxiety, heart attacks and stroke. PHEOs form in the adrenal glands, while PGLs form outside the adrenal glands, often in the head, neck, chest and abdomen. Although most PHEOs/PGLs are benign and can be surgically removed, 10 to 17 percent metastasize and become inoperable. Patients with metastatic PHEO/PGL have few effective treatment options. In a phase II trial set to launch in September, Center for Cancer Research investigators will explore treating these patients with targeted radionuclide therapy using a type of drug known as a radiopharmaceutical.

A team led by Frank Lin, M.D., Investigator and Lasker Clinical Research Scholar in the Molecular Imaging Program, will test Lu-177-DOTATATE, a radiopharmaceutical that has shown promise in early-phase clinical trials involving multiple tumor types, including PHEOs/PGLs. If successful, “this could change the standard of care,” Lin says. “In the future, whenever you have a patient with this disease who can’t be treated with surgery, then this could be the go-to therapy.” Lu-177-DOTATATE may even be able to treat other types of tumors that overexpress the same protein targeted in PHEO/PGL, such as those in certain forms of thyroid, prostate and breast cancer, Lin adds.

In the long term, Lin aims to establish a radionuclide therapy program at CCR. “This is the first trial of many more to come with this class of agents,” he says. “It will build an infrastructure for bringing other very good targeted radionuclide agents to the NIH for other future clinical trials in many other cancers.”

The past five years have seen growing interest in targeted radionuclide therapy thanks to a handful of radiopharmaceuticals that have proven effective in hard-to-treat cancers. Radiopharmaceuticals consist of a radioactive atom chemically linked to a molecule that hones in on tumor cells. Once this molecule latches onto a tumor cell, the radioactive atom emits radiation that kills not only the target cell but also cells deeper within the tumor. In a chain reaction, the dying tumor cells release chemicals that also kill neighboring cells.

The CCR receives a high volume of referrals for metastatic PHEO/PGL and is one of the few institutions in the world able to conduct a clinical trial specifically for this patient population. Lin’s team plans to recruit 90 patients with metastatic PHEO/PGL and start screening patients in September. To parse out the different subtypes of PHEO/PGL, which aren’t well-characterized, researchers will divide trial participants into two groups and compare their responses to treatment. One group will include patients who don’t have a clear genetic mutation and another will include patients who have a mutation affecting the enzyme succinate dehydrogenase, the most aggressive form of PHEO/PGL.

All patients will undergo treatment with Lu-177-DOTATATE, and their response to the drug will be evaluated through CT, MRI and other forms of imaging as well as examination of their tumor cells and tissue. Lin’s team will then assess the percentage of patients whose cancer hasn’t progressed to an advanced stage.

For more information about this trial, visit: https://ccr.cancer.gov/molecular-imaging-program/frank-i-lin