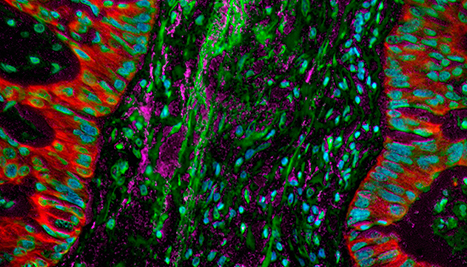 Patients with small cell lung cancer that has not responded to prior treatment may be eligible to participate in a new clinical trial at the NIH Clinical Center.

Small cell lung cancer (SCLC) is a fast-growing, aggressive malignancy. Initially, chemotherapy drugs effectively kill SCLC cells, but the responses are usually short-lived. Topotecan and temozolomide are two anticancer drugs used to treat SCLC. They work by damaging the DNA inside cancer cells, which blocks the cells’ ability to grow and multiply. The drugs can’t destroy all cancer cells because some of them can repair their damaged DNA and continue to multiply out of control. A study led by Anish Thomas, M.D., of the Developmental Therapeutics Branch is combining topotecan and temozolomide with an experimental drug called M7824 to treat relapsed SCLC. In previous studies, M7824 blocked cancer cells’ ability to evade attack by the body’s own immune system. Investigators hope that cancer cell death and pathways activated by topotecan and temozolomide can complement the activity of M7824 by helping the immune system kill more SCLC cells.