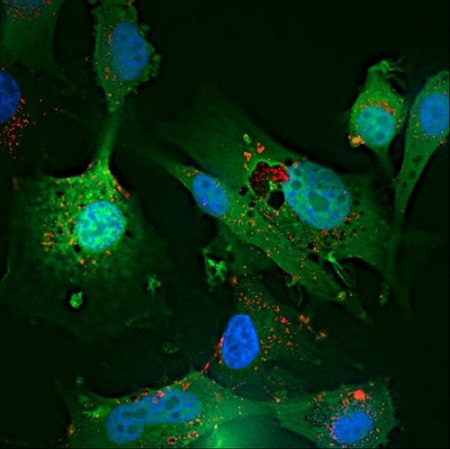 The prognosis for a glioblastoma patient is grim. Current therapies can’t remove this type of brain tumor completely, and the only hope is to prolong survival. “We don’t have treatments that kill all of the cancer cells,” says Mark Gilbert, M.D., Chief of the Neuro-Oncology Branch at CCR.

Glioblastoma arises within the brain rather than spreading there from other organs such as the breast or lung. About 16,000 people in the United States are diagnosed with the disease each year. Among the general patient population, people survive for an average of only about one year. In clinical trials, which typically only accept people who are not yet significantly impaired, survival averages about 18 months.

Patients currently begin treatment by undergoing surgery to remove as much of the tumor as possible. However, by the time glioblastoma is detected, it has spread inside the brain, and some cancer cells still remain after the operation. “It is never completely removed,” Gilbert says.

Researchers have tried to recruit patients’ immune systems to fight various types of cancer, a method called immunotherapy. If the body recognized the tumor as foreign, like a bacterium or virus, it could kill the cancer cells. Cancers have evaded these attacks by making proteins to block immune system function or stimulating cells that suppress the immune response. “There’s a whole set of checks and balances within the immune system,” Gilbert says. “The cancer has learned how to take advantage of that.”

Clinicians are already testing pembrolizumab in glioblastoma patients, but Gilbert wants to take treatment one step further. In a new clinical trial, his team is exploring the possibility of combining pembrolizumab with another therapy: a personalized vaccine.

The vaccine is made separately for each patient. Tumor cells are removed during surgery. Next, groups of linked molecules called heat shock protein peptide complex-96 (HSPPC-96) are extracted from the cells. The heat-shock proteins in the complex help degrade other proteins that are no longer needed; during that process, they bind to bits of cancer proteins. Those cancer protein fragments can be used to produce a vaccine for the patient. “They’re going to get an individual vaccine made from their own tumor,” Gilbert says.

When the vaccine is injected into the body, the immune system should develop cells that recognize the cancer proteins and kill the tumor cells. The process is similar to what happens when a person receives the flu vaccine and the body mounts an immune response against the flu virus. At the same time, the pembrolizumab will prevent the cancer from blocking that immune response.

Gilbert’s team plans to recruit about 105 patients who have been diagnosed by MRI with a mass in their brain that suggests glioblastoma. All participants will undergo surgery, radiation, chemotherapy and pembrolizumab treatment. One group will also receive a personalized vaccine, while the other group will get a placebo.

The researchers will track the fraction of patients in each group who survive for one year. Given that the disease has proven incurable to date despite international efforts to improve treatment, Gilbert doesn’t expect the therapy to eliminate the cancer. However, the trial will provide early evidence for whether the new regimen can extend survival. If the results look promising, a larger trial may be launched. “We need better therapies for patients with glioblastoma,” he says.