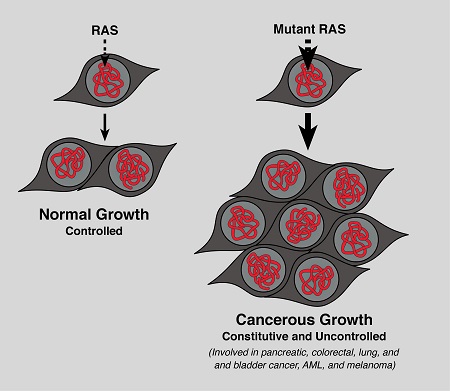 In a new study published November 23, 2016, in Molecular Cell, researchers in the CCR’s Laboratory of Cell and Developmental Signaling reported the discovery of a previously unknown route for blocking cell growth that can be activated by certain chemotherapy drugs to fight cancer.

More than one-third of all human cancers carry defects in a gene called Ras. In such cancers, the gene produces a dysfunctional form of the Ras protein, which normally acts as an on/off switch in a cellular growth pathway called the Ras pathway. The dysfunctional Ras protein gets stuck in the “on” state, resulting in uncontrolled cell growth and tumor formation.

By using a chemotherapy drug called rigosterib to target the Ras pathway, the researchers had hoped to halt the overactive growth signal sent by the defective Ras protein. They found that rigosterib indeed stopped Ras pathway signaling, but to their surprise, it did so in an indirect way.

The results suggest that chemotherapy drugs targeting communication between the stress-response and Ras pathways may offer a novel treatment approach for the large number of human tumors carrying Ras mutations, including pancreatic cancers of which 95% contain such mutations. Given the few drugs available to treat these cancers, finding novel ways to target Ras-mutant cancers is an important first step toward discovering new cures.