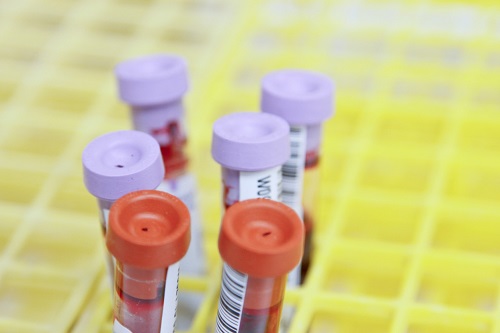 Liquid biopsies use a patient's blood to provide a noninvasive and ongoing picture of a patient’s cancer.

Center for Cancer Research (CCR) investigators at the National Cancer Institute are using circulating tumor DNA (ctDNA) as a type of noninvasive liquid biopsy for patients with diffuse large B-cell lymphoma (DLBCL), the most common type of non-Hodgkin lymphoma. Left unchecked, DLBCL can rapidly spread to the lymph nodes, spleen, liver, bone marrow, or other organs.

ctDNA is one of two types of liquid biopsies used to uncover cancer-derived material found in blood, the other is circulating tumor cells (CTC). ctDNA can be found in the cell-free compartment of blood called serum; CTC are intact cells shed from primary or metastatic tumor deposits. While both of these techniques may be applied at various stages of treatment, ctDNA is most often used to monitor for disease progression.

Cancer patients periodically undergo surgical biopsies, imaging scans, or a combination of both to analyze the genetic profile of their tumor and measure tumor burden. Monitoring a cancer patient’s response to therapy over the course of their disease is essential for medical decision-making. This continuous monitoring, however, is seldom accomplished due to the cost and invasive nature of diagnostic tools like surgical or needle biopsies. Imaging scans, such as computed tomography (CT scans) and positron emission tomography (PET scans), also raise concerns about exposure to repeated doses of radiation.

ctDNA fragments are found at relatively high concentrations in the circulation of most patients with advanced cancer and at lower but detectable concentrations in a substantial fraction of patients with localized cancers. By using ctDNA assays at various stages of disease, clinicians can noninvasively test whether a patient’s tumor would respond to a drug, ensuring the patient receives the most effective treatment based on the genetic makeup of their tumors.

While many studies have used ctDNA assays to predict drug resistance and relapse in solid cancers (including breast and lung cancers) until recently the effectiveness of using ctDNA as a surveillance tool for lymphoid cancers, such as DLBCL, was unknown.

“Almost all patients with DLBCL receive chemotherapy, but over time as many as one-third of them relapse. Outcomes of patients who have relapsed are poor,” explained Dr. Roschewski.  “ctDNA assay appears to be an important tool for the early detection of minimal residual disease, which occurs when small amounts of these patients’ tumor cells survive treatment.”

In a prior study, Dr. Roschewski, Wyndham Wilson, M.D., Ph.D., Senior Investigator in CCR’s Lymphoid Malignancies Branch, and their colleagues assessed ctDNA in the blood serum of more than 100 patients with DLBCL who were in remission following first-line chemotherapy. Their goal was to determine if relapse could be predicted by screening for minimal residual disease using ctDNA.

The researchers compared ctDNA results in a series of blood serum samples with results from repeated CT scans for up to 5 years of follow up. Among their findings, patients with detectable ctDNA in their blood during the surveillance period were more likely to experience relapse than those who did not have traces of ctDNA in their blood that occurred as early as their second cycle of chemotherapy. ctDNA assays also predicted relapse in patients 3.5 months before minimal residue disease was detected in CT scans, which is the current standard of care for monitoring DLBCL.

In a similar study, investigators at Stanford University monitored the progress of 75 patients treated for DLBCL, testing for ctDNA in the patients’ blood to identify early relapse. Before chemotherapy, ctDNA was detected in 82 percent of patients. At the time of relapse, ctDNA was found in 100 percent of patients. Moreover, ctDNA detected relapse before it was seen on PET/CT scans in many patients.

On June 1, 2016, the Food and Drug Administration (FDA) approved the first liquid biopsy test (cobas EGFR Mutation Test v2-). While this test is for patients with non-small cell lung cancer, a number of liquid biopsy tests—not yet approved by the FDA—have, or are being developed. These tests are geared to a wide array of cancer types, an important step in moving ctDNA clinical application forward, Dr. Roschewski concluded.