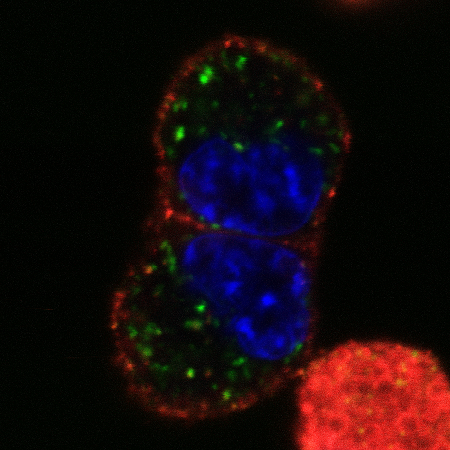 Melanoma cells capture a cytokine called IFNγ (green) on their surfaces, transport them inside the cell, and carry them back to the surface later. The cell membrane is in red, and the nucleus is in blue. Photo Credit: Jennifer Oyler-Yaniv & Grégoire Altan-Bonnet.

When a tumor forms, the immune system launches an attack on the cancer cells by releasing molecules called cytokines. Now Center for Cancer Research investigators have discovered that some tumor cells catch the cytokines on their surfaces and slowly release the molecules. The results, reported on June 1, 2017, in Molecular Cell, could explain how immune responses to cancer last for several days and why therapies targeting the immune system may work better on certain tumor types.

Cytokines are proteins released and sensed by cells. These proteins can tune the cells’ gene expression depending on the environment. In the immune system, cytokines can kill tumor cells by prompting them to self-destruct. These molecules also make the cancer cells show bits of proteins from their insides on their surfaces, which signals more immune cells to flock to the tumor site. But even though the initial burst of cytokines is brief, an immune response can last for several days—and it wasn’t clear why.

Jennifer Oyler-Yaniv, a graduate student in Altan-Bonnet’s lab, conducted an experiment to track cancer cells’ response to cytokines. She exposed mouse melanoma cells to a cytokine named interferon gamma (IFNγ) for five hours and then removed the IFNγ. IFNγ prompts tumor cells to present more protein fragments on their surfaces, activating immune cells called T cells. The activated T cells then kill the tumor cells. The team monitored that process for about a week. T-cell activation peaked about two days after the initial exposure.

At first, the result didn’t make much sense because the cytokine should have been gone by that time.  “As soon as you remove it, the signal should go away,” Altan-Bonnet says. “Why are the cells relaying this information for two days?”

To investigate further, the team mixed two sets of melanoma cells. One set had been exposed to IFNγ and washed; the second set had not been exposed to the cytokine. But when the cells were combined, the unexposed cells changed their gene expression as if an IFNγ signal was present. The results suggested that the exposed cells had somehow captured the IFNγ and later released it.

The researchers found that fatty molecules called phosphatidylserine (PS) on the cancer cells’ surfaces latched onto certain cytokines, including IFNγ. “You have to think of them as sticky tape, which is decorating all these tumors,” Altan-Bonnet says. Imaging data suggested that PS molecules bind to IFNγ, transport the cytokine inside the cell and ferry it back to the surface later to be released again.

The frequency of the catch and release process varies across tumor types, and the study might help researchers evaluate how well certain cancers will respond to immunotherapy drugs that attempt to strengthen immune system attacks on tumor cells. Cancer cells with more PS on their surfaces could be more vulnerable to these treatments because they will maintain high IFNγ levels in the surrounding tissue.