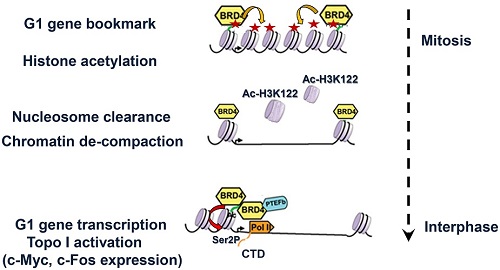 In order to express a gene, its DNA must be accessible to the transcription machinery. This requires chromatin de-compaction, which depends on the addition of acetyl groups to lysine residues on histones, thereby weakening interactions between histones and DNA and between adjacent nucleosomes. Bromodomain protein 4 (BRD4), which has been implicated in cancer and autoimmune diseases, is known to bind chromatin and promote the transcription of genes activated early in the cell cycle. Overexpression of BRD4 caused chromatin de-compaction and accelerated transcription activation, but BRD4 does not interact with any known histone acetyltransferase (HAT). This observation led Dinah Singer, Ph.D., and Devaiah Ballachanda, Ph.D., of CCR’s Experimental Immunology Branch, and their colleagues to ask whether BRD4 has HAT activity that is important for opening condensed chromatin.

The researchers found that purified mouse and human BRD4 efficiently acetylated specific H3 and H4 tail lysine residues with a unique acetylation pattern in vitro and in vivo compared to other HATs, indicating that BRD4 has intrinsic HAT activity. BRD4 also acetylated nucleosomes assembled in vitro, with a preference for H3. Surprisingly, unlike all other HATs that modify H3, BRD4 did not acetylate lysine 14 (H3K14). Preventing BRD4 chromatin binding with the inhibitors iBET or JQ1 decreased histone acetylation. In contrast, overexpressing BRD4 caused increased H3 acetylation in a number of human and mouse cell lines. The investigators mapped the domains responsible for HAT activity to two predicted acetyl CoA binding sites and a 40 amino acid putative catalytic domain in the protein’s C-terminus. BRD4 HAT activity was sensitive to the HAT inhibitors anacardic acid and garcinol but not curcumin, and its HAT activity increased with increasing pH, showing optimum activity between pH 8.0 and 9.0.

Since overexpression of BRD4 also increased nuclear volume, the researchers hypothesized that BRD4 promotes nucleosome eviction, which depends on acetylation of H3K122 within the protein’s globular domain. H3K122 lies on the dyad axis of the nucleosome at a point where DNA-histone interaction is strongest. H3K122 acetylation destabilizes the nucleosome. They found that BRD4 could acetylate H3K122 in vitro, and H3K122ac levels increased in vivo with BRD4 overexpression. In contrast, BRD4 knockdown significantly decreased H3K122ac levels suggesting that BRD4 maintains H3K122ac levels in cells. Importantly, BRD4 acetylation of H3K122 was independent of CBP and p300, two HATs that also acetylate H3K122. In fact, over 93 percent of BRD4-bound sites genome-wide overlap with H3K122ac peaks. BRD4-mediated acetylation of H3K122 led to loss of nucleosomes from native chromatin in vitro. Overexpression of wild type, but not HAT mutant BRD4, led to a loss of nucleosome occupancy genome-wide and a concomitant increase in RNA levels of BRD4 target genes genome-wide.

Finally, the investigators examined the effect of BRD4 loss in the mouse thymus. Conditional deletion of BRD4 dramatically altered the profile of CD4 and CD8 expression on thymocytes. They observed an increase in the proportion of immature, double-negative cells and a corresponding decrease in mature, double-positive cells, suggesting BRD4 is necessary for thymocyte development past the double-negative stage. H3K122ac levels were reduced by about one-third in the BRD4 knockout cells; the residual was likely due to continued acetylation by CPB and p300.