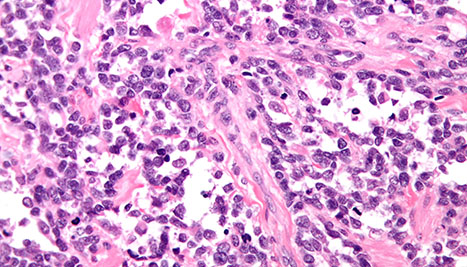 New CCR laboratory and animal research shows that a form of a cancer that occurs mainly in children, embryonal rhabdomyosarcoma, which is driven by mutations to the RAS gene, may be susceptible to inhibition by drugs that target a pathway in which MEK protein signaling, triggered by RAS, plays an important role. This new mechanistic understanding of a complex biological process led the investigators to test a drug, trametinib, in mice implanted with the cancer. Their findings show that trametinib might be a good agent to test in clinical trials for this disease.

The research team, led by Marielle E. Yohe, M.D., Ph.D., Assistant Clinical Investigator, Pediatric Oncology Branch, CCR, initiated when she was a fellow in the laboratory of Javed Khan, M.D., Deputy Chief, Genetics Branch, CCR, knew that over a third of all human cancers are driven by mutations to the RAS family of genes, but researchers have not been able to develop effective therapies that target this gene. Previous research that explored targeting RAS focused on inhibiting signaling pathways that are required for cell growth, such as those between RAS and MEK, but certain aspects of the pathways remained unclear.

In their current research efforts, reported July 4, 2018, in Science Translational Medicine, the investigators screened a number of drugs in the laboratory to see if any of them could block a vulnerable step in the pathway from RAS mutation to rhabdomyosarcoma.They zeroed in on the RAS-MEK pathway and were able to demonstrate that inhibiting MEK caused the RAS-mutated embryonal rhabdomyosarcoma cells, which are similar to skeletal muscle precursor cells, or myoblasts, to further differentiate into skeletal muscle-like cells, or myotubes. Diving more deeply into the factors that influenced this inhibition, they found that a protein known as ERK2, a kinase activated by MEK, could inhibit the expression of myotube genes, such as MYOG, and activate transcription of genes important for cell proliferation, such as MYC, that contribute to the development of cancer.

To confirm that their lab experiments could be replicated in animals, they engrafted human rhabdomyosarcoma cells in mice and found that trametinib inhibited growth of the engrafted tumors and also induced differentiation, but suppression of tumor growth was incomplete. Adding an investigational inhibitor, known as BMS-754807, which binds and inhibits insulin-growth factor receptors, further tamped down tumor cell proliferation and induced cancer cell death, indicating that this combination could be an effective therapy.

“We now have a better understanding of the pathways that play a role, and hence can be targeted, in the development of rhabdomyosarcoma,” said Dr. Yohe. “Having identified several agents in mice that could target the disease, we hope that we will soon be able to initiate clinical trials in humans to look at efficacy as well as any possible toxicity of the treatments.”