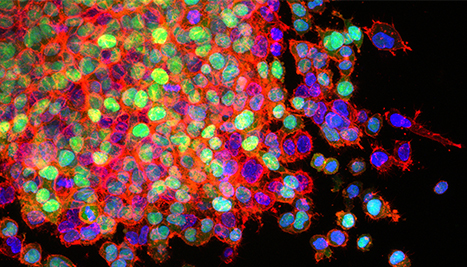 A laboratory study comparing the microbiome of human lung cancer tissue with non-cancerous lung tissue found higher amounts of specific types of bacteria in lung cancer tissue from smokers, especially tissue comprised of squamous non-small cells with mutations that turn off the TP53 tumor-suppressor gene. This finding, which appeared August 24, 2018, in Genome Biology, could point the way to using bacteria in the microbiome of smokers as biomarkers for early detection of the disease.

“We know that exposure to cigarette smoke, the primary risk factor for lung cancer, reduces the ability of the lining, or epithelial layer of the respiratory tract, to keep infectious agents from penetrating deeper into the lung,” says Curtis C. Harris, M.D., Chief, Laboratory of Human Carcinogenesis, CCR. “We also know that smoking introduces a variety of bacteria to the lung, leading to bacterial imbalances in the microbiome of smokers.”

The researchers used DNA and RNA sequencing to identify mutations in lung tissue as well as to identify the types of bacteria in the tissue. Most of the tissue samples that were studied were from patients with early-stage disease, which is where the influence of the microbiome could have the greatest impact on initiating and advancing lung cancer.

The scientists found that there was less diversity in bacterial types in normal lung tissue than found in tumor or tumor-adjacent tissue. When looking at squamous non-small cell lung cancer tissue from smokers, they found more of a specific type of bacteria, Acidovorax temporans, in that tissue compared to other tissue samples. The researchers found an even higher amount of Acidovoraxin squamous non-small cell cancers with TP53 mutations.

“We have known for a long time that environmental exposures can cause gene mutations which can lead to cancer, but we don’t know much about how a person’s microbiome impacts on his or her genes, especially those implicated in lung cancer,” says Dr. Harris. “The fact that Acidovoraxbacterium are found in greater quantities in squamous non-small cell lung cancers, particularly those with TP53 mutations, than in other types of lung cancer tissue indicates that smoking may enhance an environment in which certain bacteria can flourish, and that in turn, these bacteria could promote lung tumor growth.”

Tobacco smoke contains numerous chemical carcinogens but also harbors bacterial products that cause inflammation that can alter the protective function of the epithelial lining in the lungs. The inhaled smoke could therefore play an important role in modifying the microbiome so that it is conducive to lung cancer formation.

Based on the results of this study, the researchers are now doing studies in mouse models to try to elucidate the biology of how Acidovorax may influence the development of the disease. One aspect of interest is whether the bacteria produce toxins that could be additive factors in the development of lung cancer.

“Understanding how the microbiome can influence lung cancer is particularly important today due to recent success in using immunotherapies to fight the disease,” says Dr. Harris. “What is still unknown with many types of immunotherapy is why one person responds and another doesn’t – and that’s where the microbiome could be an important factor.”