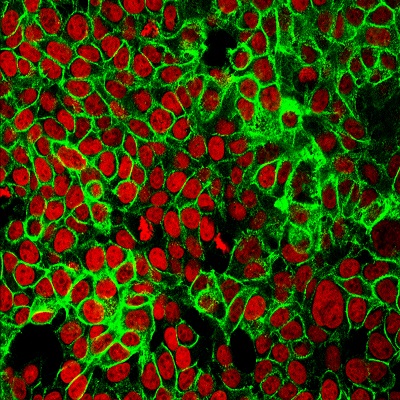 Colon cancer cells. Colorectal cancer is the second leading cause of death from cancer in the U.S. CCR researchers are investigating antisense oligonucleotides as potential treatments for this cancer.

Colorectal cancer (CRC) is the second leading cause of cancer-related death in the U.S. Improvements in therapy have increased the survival of patients with CRC from 10 months to two years, but for patients who stop responding to treatments, such as irinotecan, options for additional therapy are limited. Antisense oligonucleotides (ASOs) may offer advantages over traditional therapies if an appropriate target can be identified. Austin Duffy, M.D., and Tim Greten, M.D., of CCR’s Thoracic and Gastrointestinal Oncology Branch, and their colleagues decided to test ISIS183750, an ASO against the eukaryotic translation initiation factor 4E (eIF4E), which is dysregulated in 30 percent of cancers, including CRC.

The researchers first tested the effect of ISIS183750 in CRC cell lines. After receiving the ASO, the cells showed reduced eIF4E mRNA levels as well as decreased proliferation rates. The scientists then evaluated the combination of ISIS183750 and irinotecan or its active component, SN-38. With either, there was at least an additive antiproliferative effect, suggesting the combination could have clinical efficacy.

To test the activity of the combination in patients, the investigators established a Phase 1/2 clinical trial. They enrolled 24 patients with a median age of 62 years, 14 to the Phase 1 trial and 10 to the Phase 2 trail. Nineteen of the patients had irinotecan-refractory CRC, three had pancreatic cancer, one had small bowel cancer, and one had endometrial cancer. All patients had received prior chemotherapy with a median of three regimens. In the Phase 1 portion, patients received either 800mg or 1000mg ISIS183750 intravenously once a week along with 180mg/m2 irinotecan every two weeks, with the initial dose of irinotecan administered two weeks after the first dose of ASO. Patients did not experience any dose-limiting toxicity. However, because of chronic low grade toxicity, including fatigue, reduced white blood cell count, increased albumin in the blood, diarrhea or dehydration, and electrolyte abnormalities, and higher than expected irinotecan metabolites in the blood, the scientists decided on a Phase 2 dose of 1000mg ISIS183750 weekly and 160mg/m2 irinotecan every two weeks.

Patients received a median of two treatment cycles. Of the 18 patients who were able to be evaluated for a response, the researchers observed no objective responses, although seven of 15 patients with irinotecan-refractory CRC had a best response of stable disease, and all of these patients had disease that was clearly progressing prior to entering the trial. Based on a follow-up of 11.4 months, the median progression-free survival was 1.9 months, and median overall survival was 8.3 months.

The investigators also examined blood samples and pre- and post-treatment tumor biopsies collected from trial patients. They observed reduced eIF4E mRNA in 13 of 19 patients with serial blood samples. Likewise, eIF4E mRNA levels dropped at Day 15 after treatment in tumor biopsies from five of nine patients with CRC treated at the Phase 2 dose, but this change in mRNA did not translate into a decrease in protein expression. Using an antibody, the scientists were able to detect the presence of ISIS183750 within tumor cells and in the surrounding stroma. They suggested that the lack of change in eIF4E protein within the tumor may be due to excessive binding of ISIS183750 to the stroma or to changes in the levels of eIF4E binding proteins, 4E-BPs, within tumor cells.

While the combination of ISIS183750 and irinotecan did not result in objective responses, some clinical activity was observed in the form of prolonged disease stabilization in patients who had been clearly progressing prior to study entry. The researchers showed that the ASO could penetrate tumor cells, but its activity may have been reduced by extensive stromal binding. Future studies with ISIS183750 may require combination with other chemotherapies or treatment of patients with less-advanced disease.