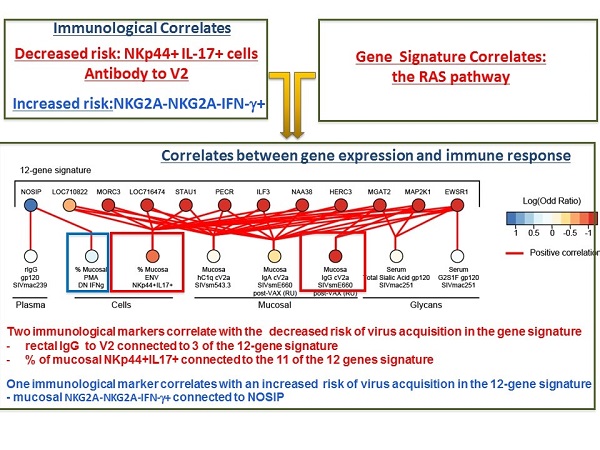 The Human Immunodeficiency Virus (HIV) vaccine trial, RV144, employed a priming Canarypox-based vector, ALVAC-HIV, along with a boost composed of segments of the HIV envelope protein, gp120, with the adjuvant alum. Results from the trial suggested the vaccine provided protection and, because of the importance of antibodies to that protection, using an adjuvant that could elicit a stronger immune response might improve efficacy. A similar vaccine, ALVAC-Simian Immunodeficiency Virus (SIV), was shown to protect rhesus macaques from certain doses of SIV infection. Genoveffa Franchini, M.D., of CCR’s Vaccine Branch, and her colleagues decided to test whether they could replicate the protection observed in RV144 using ALVAC-SIV plus SIV gp120 with alum and whether ALVAC-SIV plus SIV gp120 with MF59, the proposed adjuvant in the next human trial, could enhance efficacy.

The researchers treated the macaques at weeks 0 and 4 with ALVAC-SIV and at weeks 12 and 24 with ALVAC-SIV plus SIV gp120 and alum or plus SIV gp120 and MF59. During weeks 28 to 38, they exposed vaccinated and unvaccinated macaques to low-dose SIV weekly. Surprisingly, the regimen using alum, but not MF59, reduced the risk of SIV infection. In vaccinated macaques that became infected, the investigators observed no enhancement or virus suppression in the plasma or mucosa, equivalent numbers of virus variants in the blood, and no prevention of CD4 T cell loss.

The investigators then analyzed the vaccine groups for immunologic parameters that correlated with infection risk. While they found higher levels of serum IgG antibodies to gp120 variable region 2 (V2) in the MF59 group, there was higher mucosal V2 IgG with alum, which was associated with decreased risk of infection. In contrast, rectal IgG V2 antibodies correlated with increased risk of infection in the MF59 group. Comparing modifications on gp120-specific plasma antibodies, the scientists found enhanced sialylation, which is known to dampen inflammation, in the MF59 group, whereas alum vaccination increased G1F and G0 structures associated with enhanced antibody dependent cell cytotoxicity and increased inflammation, respectively.

Alum and MF59 also had distinct effects on immune cell activation and migration pathways. Treatment with MF59 decreased the frequency of the mucosal homing integrin α4β7, suggesting it targeted plasmablasts to alternative sites. MF59 also increased the frequency of the chemokine receptor CXCR3 likely due to recruitment of more pro-inflammatory neutrophils in lymph nodes and stimulation of higher levels of interferon-γ (IFNγ) by antigen-specific CD4 T cells. With respect to mucosal innate lymphoid cells, both adjuvants reduced levels of NKp44-NKG2A- cells and increased the frequency of NKp44+ cells. However, only in the alum group did interleukin-17-producing NKp44+ cells associate with reduced risk of infection and NKp44-NKG2A- cells that produce INFγ correlate with increased risk of SIV infection.

Microarray analysis of peripheral blood mononuclear cells pre-vaccination, post-first immunization, and post-third immunization revealed differences in expression with the two adjuvants and suggested that using alum induces an innate inflammatory response that may be more effective against SIV. In fact, expression of 12 genes pre-vaccination could predict time to infection in the alum group but was not associated with infection in the MF59 group. Importantly, these genes correlated with humoral and cellular markers of protection. Ten of the 12 were linked to RAS signaling, and the researchers confirmed the importance of RAS in infection protection using an independent vaccine method.

Importantly the expression of the 11 and 3 genes, part of the RAS pathways, in turn correlated with the development of protective interleukin-17-producing NKp44+ cells  and rectal IgG V2 antibodies respectively, providing possible biomarkers of vaccinre efficacy.

Together, these studies revealed important differences in the innate and humoral immune responses induced by alum and MF59 and dispute conventional wisdom that a more immunogenic adjuvant enhances vaccine efficacy. Further studies are needed to determine whether these results in macaques are representative of HIV vaccines in humans.