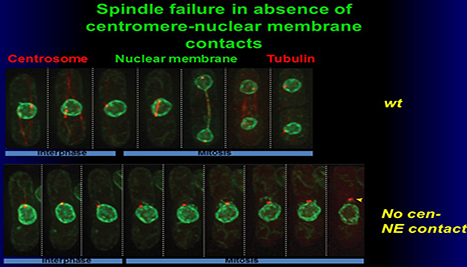 A normal cell, and a cell in which contacts between centromeres and the LINC complex have been abolished.

When cell division doesn’t go according to plan, the resulting daughter cells can become unstable or even cancerous. A team of CCR investigators has now discovered a crucial step required for normal cell division to occur.

In the study published November 23, 2016, in Developmental Cell, a team led by Dr. Julia Cooper, in the Laboratory of Biochemistry and Molecular Biology, created a faulty version of a protein complex called LINC in mutant yeast cells. Normally, LINC facilitates a connection between chromosomes inside the nucleus and an organelle located outside the nucleus, called the spindle pole body (SPB). But in the mutant yeast, this connection fails to form and the mutant cells cannot divide.

Further analysis revealed that the severed connection between chromosomes and the SPB somehow prevented the cell’s nuclear membrane from becoming porous enough to allow the SPB to enter the nucleus. Once inside the nucleus, two copies of the SPB would normally create spindles that guide duplicated chromosomes to opposite ends of the nucleus during cell division. But in the absence of this chromosome guide, cell division halts.

The findings also provide insight into how cell division may be controlled in humans. Similarities between yeast and human cells, including nuclear membrane breakdown during cell division and the existence of cellular components analogous to the LINC complex and the chromosome regions it contacts, suggest that the newly recognized regulatory pathway for cell division in yeast may also play a role in human cell division.