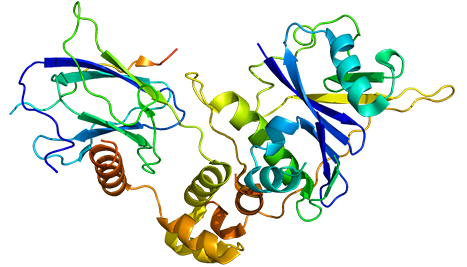 Twenty-five years ago, scientists from the National Cancer Institute uncovered the VHL gene, a gene whose mutation can lead to the development of kidney tumors.

The discovery, the result of a decade-long partnership between CCR scientists and families affected by the disease, paved the way for new targeted therapies that have improved the prognosis for patients with advanced kidney cancers.

“We’re seeing increased progression-free survival for kidney cancer patients,” says W. Marston Linehan, M.D., Chief of CCR’s Urologic Oncology Branch, who co-discovered VHL with his NCI colleagues in 1993. “We’re thrilled about the progress that has been made.”

When Linehan began his career as a surgeon in the 1970s, patients with advanced kidney cancers were treated with a standard regimen of surgery and chemotherapy, but the drugs did little to stop the cancer’s spread. Today, kidney cancer is recognized as not a single disease but made up of a number of diseases, each driven by distinct genetic features that shape its clinical course and response to therapy, and targeted therapies are available for the most common form, renal clear cell carcinoma.

This more nuanced view builds on decades of research, much of which can be traced to a bold decision by Linehan and his NCI colleague Berton Zbar, M.D., to begin searching for a kidney cancer gene in the early 1980s. At the time, few genes had been linked to cancer of any type. Genetic analyses were far more laborious and costly than they are today, and Linehan says many researchers were skeptical that their efforts would turn up anything useful.

But patients desperately needed new treatments, and Linehan and Zbar knew that in order to develop them, scientists would need a better understanding of the disease. Their early studies of tumors from patients did hint at a genetic mutation associated with kidney cancer—but when the two scientists calculated that it would take them more than half a century to pinpoint the gene itself with the standard techniques available at the time, they agreed they needed a new strategy.

Redirecting their hunt, Linehan and Zbar turned to patients who were at risk to develop tumors in several organs, including the kidneys, associated with an inherited syndrome called von Hippel-Lindau (VHL). Although most kidney cancers do not run in families, the team hoped that patients with VHL might share a genetic abnormality that would help explain how kidney cancers arise—and ultimately, how to treat and/or prevent them.

The hereditary renal cancer program that Linehan and Zbar established at NCI brought hundreds of patients and their families to the NIH Clinical Center in Bethesda, Maryland. With the support of colleagues from across the NIH, the patients received expert clinical care for their complex disease, while they and their family members became part of a massive search for clues that might point the way to an effective treatment.

Working with another NCI colleague, Michael Lerman, M.D., Ph.D., and an international team including Eamonn Maher, Linehan and Zbar began comparing their patients’ DNA with their unaffected family members’ DNA. Answers did not come quickly, but the scientists persisted. “We saw these patients every week and I told them, ‘We are going to continue going to work on this. We’re not working on anything else,’” Linehan recalls.

As more and more families affected by VHL volunteered for the study, the researchers were able to close in on their target. In 1993, after analyzing the DNA of a large number of individuals, the team found what it had been looking for: a gene that was altered in patients with VHL but intact in family members without the disorder.

The researchers soon found that mutations in the VHL gene are not only responsible for the inherited syndrome, they are also found in the tumors of most patients who have developed clear cell kidney cancers without a family history of the disease. In contrast, the gene was rarely mutated in the tumors of patients with other types of kidney cancer.

This seminal discovery paved the way for studies that tied VHL to a key oxygen-sensing pathway and revealed how a failure in the pathway promotes tumor growth. Researchers around the world used that knowledge to explore ways to block tumor growth.

As a result, the U.S. Food and Drug Administration has approved nine drugs that target the VHL pathway for the treatment of patients with advanced kidney cancer. Linehan and his colleagues and others have also gone on to link sixteen more genes to various forms of kidney cancer, offering insight into those diseases and hope for targeted treatments.

Twenty-five years after the VHL gene’s discovery, Linehan is pleased to see drugs that target the VHL pathway having a real impact. He’s quick to note, however, that his work is far from finished.

“We have a long way to go,” he says. “There are remarkable responses, but we need to do a whole lot better to be able to cure the majority of patients with this disease.” Linehan continues to see patients weekly, while he and his team investigate kidney cancer’s causes and test new treatment strategies in clinical trials. “When I see patients in the clinic who have these cancers that have spread, I think, I don’t care what it takes. We owe it to these people.”