Dr. Rein is a recognized expert in virus assembly, particularly with respect to human and murine retroviruses.Â  Other research interests include structure-function relationships in viral RNA and cellular defense mechanisms against retroviruses.Â  As Head of the Retrovirus Assembly Section, he studies molecular mechanisms of retroviral replication and pathogenesis, with the hope that this understanding will lead to new methods of combatting retrovirus-induced disease, including AIDS.Â

Mechanisms in Retroviral Replication and Pathogenesis

The goal of the research efforts in the Retroviral Assembly Section is to extend our understanding of basic mechanisms in retroviral replication and pathogenesis.Â  Our hope is that this understanding will lead to new methods of combatting retrovirus-induced disease, including AIDS.

We have analyzed the properties of recombinant HIV-1 Gag protein in some detail.Â  When nucleic acid is added to Gag, the protein assembles into virus-like particles.Â  This is a very nonspecific interaction: almost any nucleic acid will support assembly.Â  These particles are significantly smaller than authentic viral particles, but particles of the correct size are formed if inositol phosphates, as well as nucleic acid, are provided to the protein.Â  In the absence of nucleic acid, the protein is in monomer-dimer equilibrium, using the previously described interface within the C-terminal domain of its capsid moiety.Â  We generated a mutant of Gag that remains monomeric at relatively high concentrations.Â  We have subjected this mutant protein to a series of hydrodynamic and biophysical analyses.Â  These results, together with modeling studies, indicate that the protein is folded over in solution, with its N and C termini relatively close together in three-dimensional space.Â  Since Gag molecules are extended rods in immature virus particles, they must undergo a drastic conformational change during particle assembly.Â  Collaborative studies using neutron reflectivity and other techniques have now shown that Gag extends when preferred ligands are available for both its N-terminal ("matrix") domain and its C-terminal ("nucleocapsid") domain.Â  Interestingly, unlike HIV-1 Gag protein, the Gag protein of the gammaretrovirus Moloney murine leukemia virus is rod-shaped in solution, just as it is in immature virus particles, and does not dimerize significantly in solution.

Gag is also a nucleic acid chaperone, and participates in the annealing of a cellular tRNA molecule to the viral RNA, where the tRNA will serve as primer for viral DNA synthesis.

There appear to be several different modes of interaction between retroviral proteins and nucleic acids, each with important functional consequences for viral replication.Â  First, an exquisitely specific recognition by the Gag polyprotein (the structural protein of the virus particle) selects the viral RNA for packaging during virus assembly.Â  This recognition involves zinc fingers in the protein. We are studying the mechanism by which the Gag protein recognizes and packages the genomic RNA of the virus during assembly in vivo.Â  Our research strongly suggests that the recognition signal involves the three-dimensional structure formed by a dimer of genomic RNA molecules.Â  We are studying the structure of the dimer linkage and its possible role in packaging of viral RNA.Â  We have found that virus particles lacking genomic RNA contain cellular mRNA molecules in place of the viral RNA; in general, these mRNA molecules are packaged nonselectively.Â  We developed methods enabling us to measure the affinity of recombinant Gag protein for different RNAs.Â  Although we could detect preferential binding of the protein to RNA containing the packaging signal, this was only possible under highly unnatural conditions, such as supraphysiological ionic strengths.Â  Nevertheless, this RNA supports particle assembly more efficiently than control RNAs.Â  We are now testing the hypothesis that genomic RNA is selectively packaged because it initiates assembly with particularly high efficiency.

The mechanism by which nucleic acid promotes particle assembly by the Gag protein is not known.Â  We recently reported that a very short region of Gag, termed "SP1," undergoes a conformational change when it is at high concentration.Â  We proposed that this region "senses" the local Gag concentration, and that the increased Gag concentration resulting from cooperative binding to nucleic acid would thus lead to a change in Gag conformation, exposing new interfaces required for particle assembly.Â  This hypothesis would explain the contribution of nucleic acid to particle assembly.Â  Our subsequent experiments have provided extensive support for this overall hypothesis.Â  We showed that juxtaposition of only two SP1 molecules is sufficient to induce the conformational change and additional association of these SP1 peptides.Â  The data suggest that SP1-SP1 association can contribute significantly to virus particle assembly and stability.Â  These experiments also uncovered the molecular mechanism underlying these phenomena.

We are also studying the mechanism by which the restriction factor mouse APOBEC3 blocks infection by murine retroviruses.Â  This restriction, unlike retroviral restriction by human APOBEC3G, does not involve hypermutation of G to A in the viral genome.

We are also performing a collaborative study on the HIV-1 Rev Response Element (RRE), a structure in HIV-1 RNA that is recognized by the virus-coded protein Rev in the export of unspliced viral RNAs from the nucleus.Â  Using small-angle X-ray scattering, our colleague Dr. Yun-Xing Wang showed that the RRE folds into an "A" shape, and that the two primary Rev binding sites are opposite each other on the legs of the A.Â  They are separated by a distance of 55 Ă….Â  This distance corresponds to the length of a dimer of Rev, suggesting that this unusual topology can explain the specificity of Rev for the RRE.Â  We tested this hypothesis by assaying the functional capabilities of a number of RRE mutants; all of the results supported the idea that the distance between the two sites is the key to RRE function.Â  We are continuing to dissect the RRE and to explore the implications of these results for antiviral therapy.

In collaboration with Dr. Edward Gabrielson (Johns Hopkins Medical Institution), we have developed sensitive assays for the presence of mouse mammary tumor virus-related sequences in human breast cancers.Â  However, to date we have found no evidence for these sequences in the human samples.

Many gammaretroviruses such as MLV encode an alternative form of the Gag protein called "glycogag."Â  Although multiple functions of this protein have been proposed, its significance in MLV replication is still not clear.Â  We have developed reagents for the independent expression and detection of Gag and glycogag and are analyzing the functional effects of glycogag expression.Â  Our results to date show that glycoGag has a very significant effect on the infectivity of an MLV virus particle under certain very specific conditions.Â  We have found that with some viral envelope proteins, glycogag expression enhances the ability of MLV particles to penetrate into new target cells.Â  However, glycogag impairs the ability of MLV with Ebola glycoprotein to penetrate new cells.Â  Our data imply that all of these glycogag effects represent antagonism towards the cellular protein Serinc5.Â  Another retroviral â€śaccessory proteinâ€ť, the S2 protein of equine infectious anemia virus, acts very similarly to MLV glycogag, although the two proteins are completely unrelated.

Dr. Alan Rein obtained his Ph.D. with Dr. Harry Rubin at the University of California at Berkeley and did postdoctoral research as an American Cancer Society Fellow under the direction of Dr. Sheldon Penman at the Massachusetts Institute of Technology.Â  Dr. Rein has been associated with the National Cancer Institute (NCI) since 1976 and served as Head of the Retroviral Genetics Section in the ABL-Basic Research Program from 1984 to 1999.Â  In 1999 he joined the HIV Drug Resistance Program (renamed the HIV Dynamics and Replication Program in 2015) as Head of the Retrovirus Assembly Section and was appointed to the NCI Senior Biomedical Research Service.Â  Dr. Rein received the NIH Director's Award in 2012, and in 2014 he was elected a Fellow of the American Academy of Microbiology.Â  His research has dealt with a number of aspects of the biology and molecular biology of murine and human retroviruses, including virus assembly and maturation, viral envelope function, translational suppression, and pathogenesis.Â  In 2011 he received a two-year Breast Cancer Research Program grant from the Avon Foundation for Women to support a collaborative project on "Testing for MMTV and Related Retroviruses in Breast Cancer" with Dr. Edward Gabrielson at Johns Hopkins Medical Institution.Â  In 2012 Dr. Rein was awarded a three-year Program Grant from the Human Frontier Science Program (HFSP) to support his international collaboration with Drs. Bogdan Dragnea, Dmitri Svergun, and Paul Van der Schoot on "Physical Principles in the Self-Assembly of Immature HIV-1 Particles."Â  Dr. Rein was an Organizer of the 1995 Cold Spring Harbor Laboratory Meeting on Retroviruses and the 2001 International Retroviral Nucleocapsid Symposium and a Keynote Speaker at the 1998 International Congress of Medical Virology, 2000 West Coast Retrovirus Meeting, 2014 Symposium on Mathematical Virology, and 2016 Cold Spring Harbor Laboratory Meeting on Retroviruses.Â  He currently serves on the Editorial Boards of the Journal of Virology and Journal of Biological Chemistry and was on the Editorial Board of Virology from 1990 to 2016.Â  He served on the Center for Cancer Research (CCR) Tenure Review Panel from 2006 to 2017 and currently serves as a member of the CCR RNA Biology Initiative.Â  He is also a collaborative member of the HIV Interaction and Viral Evolution (HIVE) Center, a consortium of leaders in the field of HIV research who are applying their structural and functional knowledge of drug resistance evolution to the design of more effective anti-HIV treatments.

Tomas Kroupa (postdoctoral fellow, 2017-present) received an Intramural AIDS Research Fellowship (IARF) award in 2020 to support his research project on "Kinetics of Specific and Nonspecific Interactions of HIV-1 Gag with RNA."Â  Awarded by the Office of AIDS Research, Office of Intramural Research, and Office of Intramural Research & Training in the National Institutes of Health, IARFs include full stipend support to successful candidates who demonstrate outstanding scientific potential through both an imaginative and thoughtful research plan and a well thought out career development plan.

A publication resulting from a collaboration between the Rein lab and that of Peter Schuck, National Institute of Biomedical Imaging and Bioengineering (Zhao et al., JBC 294: 16480, 2019, doi.org 10.1074/jbc.RA119.010580) was selected as an Editorsâ€™ Pick in the November 8, 2019 issue of Journal of Biological Chemistry.

The keynote lecture by Alan Rein ("Retroviruses: Some Perspectives") at the 2016 Cold Spring Harbor Laboratory (CSHL) Retroviruses Meeting is featured on The Leading Strand, a website spotlighting the keynote presentations at CSHL meetings.Â  Dr. Reinâ€™s lecture is also publicly available through YouTube and Apple's iTunes University.

Mauricio Comas-Garcia (postdoctoral fellow, 2013-2018) received $1,000 travel awards for presenting one of the two most meritorious talks by NCI fellows at the 2017 and 2016 HIV DRP Think Tank Meetings.

Ina O'Carroll (research fellow, 2014-2015) received a travel award for one of the best presentations at the Center for Cancer Research Fall HIV/AIDS & Cancer Virology Think Tank Meeting in 2015.

Alan Rein was elected to Fellowship in the American Academy of Microbiology (AAM) in 2014. AAM Fellows are recognized as distinguished scientists who are "elected through a highly selective, annual, peer review process, based on their records of scientific achievement and original contributions that have advanced microbiology....Each elected Fellow has built an exemplary career in basic and applied research, teaching, clinical and public health, industry or government service."

Ina Oâ€™Carroll (postdoctoral fellow, 2009-2014) received an NIH Fellows Award for Research Excellence in 2013 for travel to attend and present her work at a scientific meeting in the U.S. This award, which acknowledges outstanding scientific research performed by intramural postdoctoral fellows, is sponsored by the NIH Fellows Committee, Scientific Directors, and Office of Intramural Training and Education and is funded by the Scientific Directors. FARE awards are based on scientific merit, originality, experimental design, and overall quality and presentation of the abstracts.

In 2012 Alan Rein received the NIH Directorâ€™s Award as a member of the Intramural Research Program (IRP) XMRV Working Group, which also included Mary Kearney, Stuart Le Grice, and Vineet KewalRamani in the HIV DRP and Jeffrey Lifson, Rachel Bagni, and James Hartley in SAIC-Frederick.Â  The NIH Director's Award to the IRP XMRV Working Group was highlighted in the December 2012 issue of the National Cancer Institute at Frederick Poster newsletter. 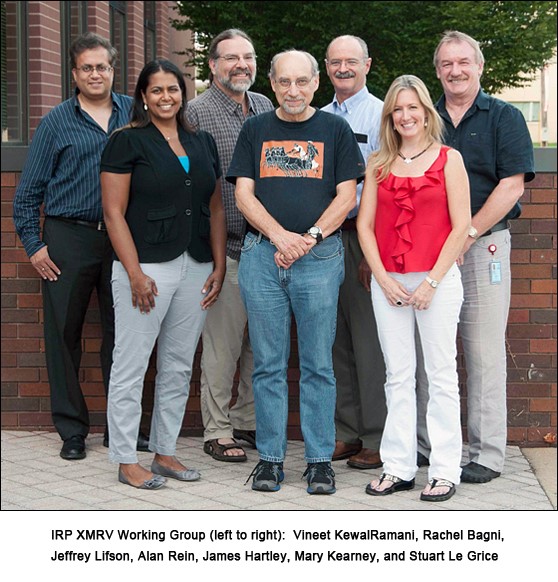 Alan Rein was featured as the guest investigator on the December 26, 2010 podcast of "This Week in Virology" to discuss retroviruses and the newly reported virus XMRV.