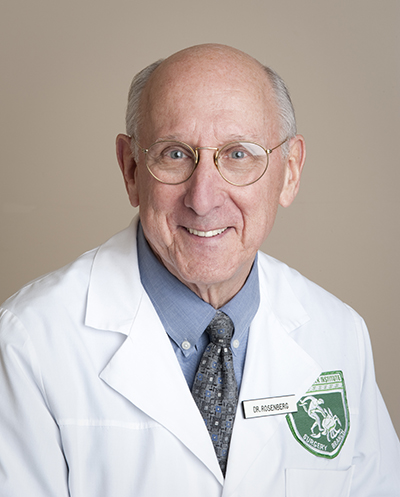 Steven Rosenberg, M.D., Ph.D., Chief of CCR’s Surgery Branch, has been named the 2015 Federal Employee of the Year by the Partnership for Public Service for his pioneering research to develop life-saving immune-based therapies for patients with advanced cancers. The award is the highest Samuel J. Heyman Service to America Medal, or Sammie.

For more than four decades, Rosenberg, has conducted research at NCI (See Adopting Bodily Defenses to Cure Cancer,” CCR connections, Vol. 8, No.1). He was the first to demonstrate that administering interleukin-2 could be used to effectively treat tumors in some patients with metastatic disease. He also laid the foundation for cell-based immunotherapies, specifically the development of adoptive cell transfer (ACT), which uses the body’s own immune system to attack cancer cells. Rosenberg was the first to demonstrate that genetically modified T cells could mediate cancer regression in patients with melanoma, sarcomas, and lymphomas.

This medal is one of eight Sammies awarded annually by the Partnership for Public Service, a nonprofit, nonpartisan organization that works to revitalize the federal government. This year’s recipients were selected from a group of over 500 nominees drawn from almost every major government agency. The Sammies have earned a reputation as one of the most prestigious awards dedicated to honoring America’s civil servants and have come to be known as the “Oscars of government service.”