Shaping the Future of Cancer Research 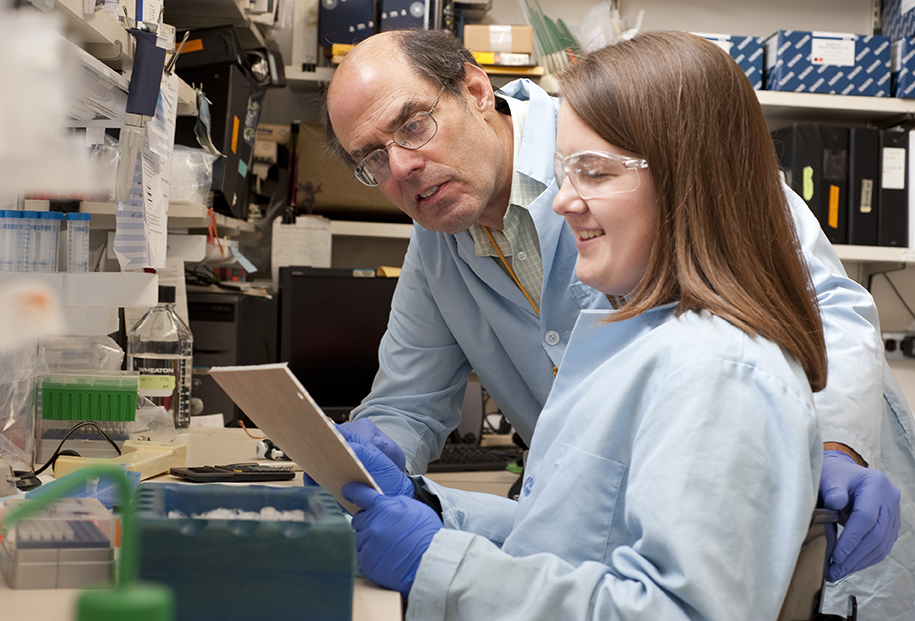 CCR supports several programs to foster the next generation of biomedical scientists.

Twenty-five years ago, NCI administrator Gordon Cecil came to Howard Young, Ph.D., now a Senior Investigator in CCR’s Cancer and Inflammation Program, with an idea to give local high school students first-hand exposure to scientific research at NCI at Frederick. From that conversation, the Werner H. Kirsten Student Intern Program was born, and nearly 1,000 students have gone through the program since that time. Seventy students make up the current class of interns.

“We started slowly,” said Young. “The first year, we selected six students from an applicant pool of ten. Each year, we learned from what we had done before and modified the program accordingly.” In its current incarnation, students work full-time in laboratories for eight consecutive weeks during the summer and then for at least three hours per day during the school year. They receive stipends for their summer internship and high school course credits for their work during the school year.

“It’s hugely transformative,” said Janelle Cortner, Ph.D., Scientific Program Administrator in CCR’s Office of the Director. “Maybe the students have had a physics or biology lab in high school, but these are usually cookbook assignments for which the answers are known. Through the Werner H. Kirsten program, they get right into real laboratory research. By the end of the summer, there is a transformation that happens: the kids become scientists, not just students.”

“My laboratory has always found them a critical asset,” said Young. “Many help with screening of mice, for example. The rare student can lead his or her own project; however, you do need someone in the laboratory committed to interacting with them on a daily basis.”

Students initially came from high schools within close proximity to NCI at Frederick, but the program has expanded to include students from neighboring counties and those who are homeschooled.

With a 15-hour-per-week time commitment during a student’s senior year in high school, the program is not for everyone. “Through our outreach and during the interview process, we stress that this is very intense and requires a serious commitment. This is not something you do just to add it to your college application,” said Cortner. “On the other hand, the best students are balanced students with good time management skills.”

“I had a student who was involved with so many things—president of his senior class, captain of the football team, quarterback, that meeting his responsibilities to the program was difficult. Sometimes, he didn’t show up on time and we had to sit down with him and talk about our expectations for him to succeed as an intern. A few years later, when his sister went into the program, he came up to me at the reception and told me how meaningful the program was to him. It was very gratifying to hear this, and, although he did not pursue a career in biomedical research, he was very successful in starting his own IT company,” said Young.

While the program administrators have not been able to track all the students who have come through the program, at least 118 students continued on to pursue scientific or medical careers.

Amy Franciscovich, M.D., a Pediatrics Resident at The Johns Hopkins University, also interned with Young between 2001 and 2002. Franciscovich went on to complete a bachelor’s degree in chemistry at Emory University, before entering Harvard Medical School. “Working at NCI was the launching point for many of my future adventures in science, giving me not only a foundation in technical skills and an understanding of laboratory equipment and methodologies, but also providing a forum for nurturing my intellectual curiosities, encouraging further inquiries and brainstorming, and teaching me how to deeply think about a specific problem while also being able to see from the 30,000-foot view,” said Franciscovich. “This experience taught me that the most meaningful work comes when working with a team that values mentorship.”

Applicants are matched to mentors according to mutual interest. Mentors have access to all applications and can choose those students whom they wish to interview. After the interviews, mentors and students rank their best fit, and an algorithm makes as many matches as possible.

“The only limits we have are recruiting enough mentors,” said Marsha Nelson-Duncan, Education Outreach Specialist for the Office of Scientific Operations at NCI at Frederick. “The mentors have made the program successful; it’s part of the NCI mission to train the next generation of scientists, and the mentors take that very seriously.”

Dan Edelman, Ph.D., manager of the Clinical Molecular Profiling Core in CCR’s Genetics Branch, has always included summer students in his laboratory, but did not anticipate starting a training program of his own. In 2009, a female student contacted Edelman through his parents to request an internship. “She was an Orthodox Jew, as am I, and during the summer of her internship, we spoke for many hours about whether she could pursue a career in science when there seemed to be too many lifestyle barriers and intellectual contradictions. There were issues that could be dealt with, but at the time, I had no structured way to address them.”

Three years later, Edelman received a phone call from a science teacher at Bnos Yisroel High School, a Jewish, Torah-guided girls’ school in Baltimore, Md. She was looking for opportunities for her students to see some real-world applications of what they were learning from the single science course taken each year in grades 9–11. In the summer of 2013, six female students came to Bethesda for an introduction to biomedical science. During rotations through dozens of labs and clinics, they were charged with reading scientific articles and presenting posters based on their literature review. Edelman met with them weekly to sort through their new experiences and learn how to navigate in this new environment. Of this original cohort, five returned in 2014 for an 8-week paid summer internship; three of the five returned again in 2015.

“I thought I was bringing these girls here for the science, but it was so much more. In the last three years, the girls have developed an incredible sense of confidence; they see they are able to retain their level of religiosity and yet step into the world of science, and, in this case, the world of NIH,” said Edelman.

The program has continued to bring in additional interns; so far 24 students have participated. Additionally, postdoctoral and postbaccalaureate fellows serve as mentors for the first-year interns, and to ensure the best fit, they are screened through an application process. “In their own careers, they’ve already seen the importance of mentorship, either because they had it or didn’t. Someone has to step up to the plate and help the next generation,” said Edelman.

A Foot in the Door

Expanding the diversity of talent in the biomedical workforce is also the goal of the CCR Cancer Research Intern (CRI) program, which is part of the NIH Summer Internship Program. These internships are aimed at students—undergraduate and graduate—whose lack of opportunity might make them less competitive for the NIH summer internships, despite their talent and drive. The program provides one year of support only to students from groups that are underrepresented in the biomedical workforce or those from disadvantaged backgrounds. The program helps the interns network with CCR scientists to find future opportunities. Since 2004, the program has placed 272 students in CCR laboratories.

“The internship is particularly important for those students continuing toward a Ph.D. or other advanced track after an undergraduate degree because research experience is really important for a lot of graduate school selection committees,” said Jonathan Wiest, Ph.D., Director of CCR’s Office of Training and Education.

“The intent is to bring in individuals from a wide range of backgrounds to increase the diversity of the summer intern program and, ultimately, the biomedical workforce. Diversity brings new thoughts, ideas, and creativity to research teams. Diversity is also key to addressing socioeconomic health disparities. We still have a lot of work to do to have a diverse workforce that mirrors the population of this country.”

To learn more about training opportunities at CCR, please visit the Office of Training and Education website at https://ccr.cancer.gov/training.